It really tweaks my melon, again


Once again, I'm going to channel my inner Abe Simpson and publicly whine about a few things: 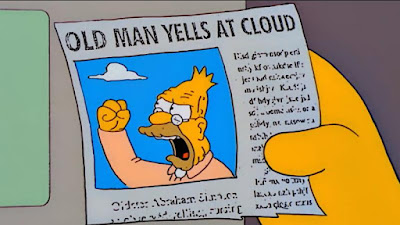 Major League Baseball is on hiatus
By hiatus, I mean I’m not watching any of it this year. A few years ago, back when I was still exercising regularly, I was on the road for work in Utica. I had just gone for a jog and noticed that there was a baseball game being played at the high school next door to the hotel. I went over and watched a few innings. Yes, a game played at the high school level is not played as well as in the big leagues. But it was more fun to watch. And since my oldest daughter has been playing softball, I’d rather be a part of that than watch a pro game. Have you ever seen a college softball game? That’s more fun to watch than a pro baseball game too. But major league greed is what pushed me over the edge. This off season, it has become painfully clear that there are several teams that just don’t care about a winning season for their fans. I’m not taking about a World Series win, I’m talking about putting a pro team on the field that is worth watching. Something more than a game above 500. Tanking multiple seasons has become an accepted practice and every year is a "rebuilding year." Pro baseball doesn’t deserve its fans.

Veterinarian Bills
Our dog Bailey recently got spayed. Now maybe it’s the vet office we chose, but if the cost of spaying/neutering a dog is this much everywhere, there is no reason to wonder why there are so many orphaned dogs. A lot of people aren’t going to pay that. I’m surprised I paid that. A few years ago, there was a great weekend in Boston with a bunch of college friends. We ate and drank and had a blast. Valet parking was involved. That all-out 3 day weekend was cheaper than the sum of our first 3 vet visits.

I don’t have a lot of experience with veterinarians, but spaying/neutering is something they should probably do a little closer to cost (which should include payment for their time). We needed to return a few weeks after our first visit for a booster shot. They offered to draw some blood for some tests before the spaying operation. It would be $100 cheaper to do in advance instead of on the day. Yeah, sure. Do that. For comparison, I had some blood work done a few months after getting bitten by a tick.

Insurance company: We’ll give you $49

What an absurd scam. I don’t expect the vet to lose money with spaying and neutering. But maybe if they didn’t quadruple up on the cost of the procedure, more people would listen to Bob Barker and “help control the pet population. Have your pets spayed or neutered.”

Restaurant Apology
We went out to dinner last night. We weren’t rushing, but we had one daughter with us and had to pick the other up so we weren’t planning for a long meal. After placing the order, we waited. After about 15 minutes, the waiter came to top off our water glasses and said the food would be out shortly. About 10 minutes after that, he came back and told us that they lost our ticket and were rushing to fill our order now. He apologized. We said it was OK, it happens. He brought out the food and apologized again. We started eating. A manager came over to check on us and apologized, asked how everything was and told us she was going to comp an entrée. She said there was an emergency in the kitchen, someone had to rush out and the ticket got lost. We accepted her apology. The waiter apologized a few more times. They offered us a free desert which we passed on because we had to get going and they took a $21 entrée off the bill. I don’t think I’m exaggerating when I say they apologized for the delay 6 or 7 times. It kind of felt like the Monty Python sketch about the dirty fork: “I am the manager. I’ve only just heard." "I want to apologize humbly, deeply and sincerely about the fork.”

The apologies worked. I don’t have any ill will toward the restaurant and I’d go back. Truth be told, the only apology I really wanted was for making me have to listen to Phil Collins sing Against All Odds while waiting for dinner.

Reviewing the Reviewer
More often than not, when I buy a Sunday Times Union it’s because I need paper for lighting chimneys of charcoal or fires in the wood oven. That’s probably a sad statement about the newspaper business. I haven’t been keeping up with the weekly restaurant reviews but when I get a paper I read the write up. It’s weird how reviews seem to end up in either moderate, silent reader agreement or passionate, loud reader disagreement. Writing style plays a big part in it too. I’m sure the current reviewer is a great person, but I don’t care for her writing style. Aside from occasionally needing a dictionary to understand a sentence, there have been a few “scat” references that I felt were poor choices in a professional restaurant review. From a review of Forged:

The black bean brownie with tofu ganache ($9) certainly pushed me to the edge, with its constipated scat of solid black beans and oats, and dribbly coconut milk “whipped cream” with an empty taste of melted ice.

Maybe it was an attempt at humor that went by me. It’s ok not to like something, but the Times Union restaurant review can make or break a local restaurant. Leave “constipated scat” out of a review. And water. Water is “the empty taste of melted ice.” In this week’s review of the Galleria 7 Market, there was an unnecessary shot at a nearby restaurant.

Of course, you've already checked out Innovo Kitchen in the corner, either because your curiosity was piqued by its owners' embezzlement imbroglio at their previous place or because you'd heard they were killing it in their new space.

Yes, Innovo Kitchen had a stand in the Galleria 7 Market, but it's gone now. It is a stand alone restaurant around the corner in the same strip mall. Why even mention Innovo Kitchen at all? I don't think the owner or restaurant have anything to with the place being reviewed. It just seems like an unprovoked, mean spirited jab.


Then in the description of the pizza place in the food court:

Anna's pizzas, cooked to order in three minutes, have an intriguing tangy tomato sauce and soot-blackened bottoms that could use a little crunch ($11).

I’ve been to Anna’s once. It’s not my favorite pizza. As my father would say, “It isn’t the worst pizza I ever had.” It is easy to find worse pizza locally. I had a slice for lunch last week and I’m still mad at how bad it was (I should have just turned around and left after getting a look at the slices). Anyhow, the reviewer wished Anna’s crust was a little more crisp. Now, I’ll give you Anna’s isn’t a true Neapolitan pizza, but it is clearly inspired by the style and that style is not crisp. To my completely insane pizza obsessive sensibilities, that’s like saying, “the pizza was alright but I wish it was Chicago Deep Dish instead” or “I ordered the steak but wished it was chicken.”

An Anniversary
One year ago today, according to my brother in law's Facebook timeline (and the end of this post), the first pizzas came out of the wood oven. 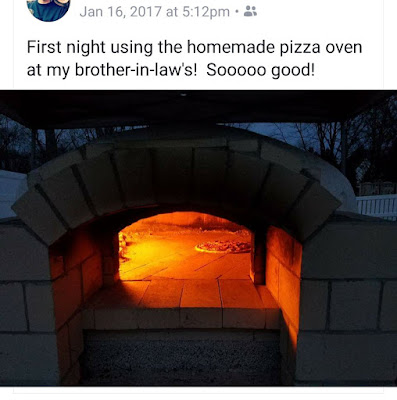 Made some good progress on the oven since then. It's snowing now but the forecast calls for 40s on Saturday. Time to fire up the oven and make some pizza. I think I’m going to try to make some bigger pies this time. I’m usually in the 13-14 inch range. I’m going to see if I can bump a few pies up to 16 inches. As I age, it’s amazing what passes for excitement.

Note to Phairhead - I hope you are feeling better soon!