Take me out to the ball game


When we go to The Joe for a Valley Cats game it is usually with a group. The elementary school goes to a game right when school gets out and a group from work usually goes sometime in July. Both of those come as package deals. For 10 to 12 bucks you get the ticket, a not very good burger or hotdog, a small cup filled with mostly ice and a splash of soda, plus a little bag of chips.

This year, we couldn’t make either group trip to the game. On Saturday, we went on our own. I think there might have been a slightly smaller crowd than usual because of the Traverse Stakes up in Saratoga. I think there was a concert and the fight was on Saturday too. I went online to buy tickets Saturday morning and there were plenty of blocks of 4 to pick from. For $12 a ticket (plus a $3 processing fee for who knows what since I printed the tickets myself and a computer handled the transaction on their end) we had seat almost behind home plate. Just a little bit towards first base, 5 rows back. Every other time we have gone, we have been much further up a baseline.

The seats were really good. You could get a sense of the strike zone (kind of – the ump was a little all over the place with balls and strikes), see a slider drop and watch a ball slice through the air after it was hit. We got a late start going to the game. The kids had some friends over and I was fighting some framing on the oven enclosure. Instead of eating the fairly bad food at the park, we stopped at Mac’s Drive In for bacon cheeseburgers and their homemade fries on our way to the ball park. We missed the top of the first inning but were in our seats for the bottom of the first 2 out rally where the Cats scored 5 and hit 3 home runs. 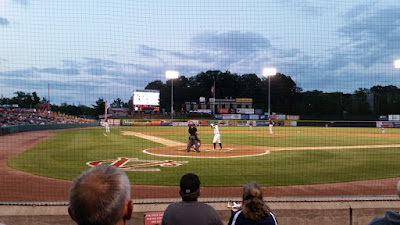 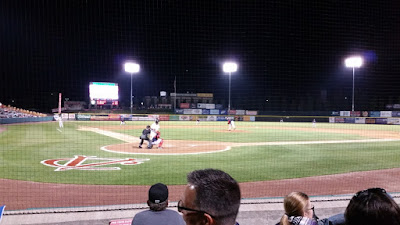 The umps were having a off night. Besides the moving strike zone which both teams complained about enough to get yelled at by the field umpire, the field umpire totally blew a call at second base. A Cat hit a single and rounder first. The outfielder overthrew the ball past second base and runner took off. The ball was caught, thrown to second base and beat the runner there. But there was no tag. The runner was clearly safe. The third base coach came out to complain but that was that. That call cost the Cats a run. During the next at bat there was a wild pitch where the runner on 2nd could have walked to third. The next batter hit a long fly ball and the runner could have tagged up from third and scored. Turns out they didn’t need the extra run and won the game 9 to 1.

For some reason, both teams seemed to have a lot of everybody-in-the-infield meetings on the pitcher’s mound. When that happens in a softball game, the girls in the outfield often have their own meeting in center field. No idea what they are talking about but whenever I see players talking at the mound it makes me think of the scene from Bull Durham where the players arediscussing potential wedding gifts during the game. 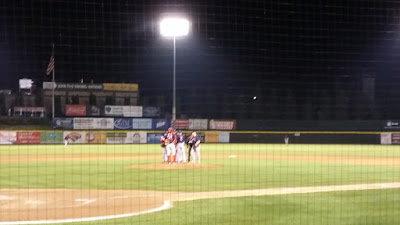 If you can plan ahead a little bit, these tickets are worth it. It’s a completely different game viewing experience.
Posted by Jon in Albany at 8:52 PM