There should be a saying about families that go on food tours together...

Daniel at FUSSYlittleBLOG lead a tour of seasonal stand burgers this weekend. And now that they've done a few food tours, I don't have to drag the family. They come willingly. One thing that struck me as new for this tour was that I had already been to all of the stops. I had only had ice cream at two of them, but usually these tours have me exploring new-to-me places.

I'm not going to crunch the numbers this time. You'll have to wait for Daniel's tour results for a numerical analysis. The more I look at our score sheets, they more confusing they get. Unlike the ice cream tours where it was easy to get the same thing at every place, we went with a slightly different plan plus we had 4 people splitting an order. A quarter of a little burger isn't a lot. The plan was to get 1 plain cheeseburger and 1 specialty of the house burger. And a small order of fries because when's the next time you're going to get to try fries from 5 places in the same day? Too good an opportunity to pass up.

The first stop was Jack's Drive In in Wyantskill. The specialty burger there is a cheeseburger with fried onions and ketchup. That went along with a plain cheeseburger and a small order of fries for $6.97. 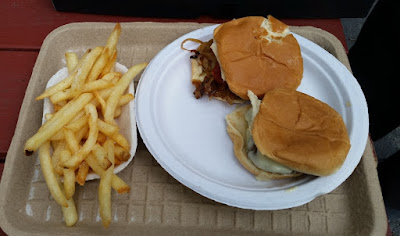 I liked the plain cheeseburger. Toasted bun. little greasy. It's what you expect at at roadside burger stand. The fries were nothing special and unsalted. You've got to hit the fires with salt right out of the fryer. Although, as the tour progressed, they're not alone in leaving the salt up to the customer. Where they lost me, was the fried onion and ketchup. I'm not the biggest ketchup guy. This was way too much of it and mixed with the onions, it just didn't work for me.

Amy -  thought the burger was tasteless, the unsalted fries took away from their taste and the specialty burger had twice the amount of onions than burger. She would have like them cooked more and the ketchup should be optional (it is, I did the ordering and this is considered "One, with"). She also noted the fast service. It was pretty quick.

Casey- On the onion burger I didn't even know it was a burger. I thought it was only onions.

A short ride brought us into Watervliet for a stop at Mac's Dive In. This is one of the ice cream only previous visits. It didn't win our vote as the best soft serve on the last tour, but it was our runner up. There didn't seem to be a specialty burger so we went with one cheeseburger, one bacon cheeseburger and a small hand cut fries. This order came in at $10 even. 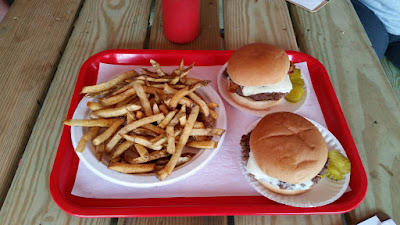 Yup, that's a small order of fries. The order took a few minutes to make and was clearly made to order. My impression while I was eating at Mac's was that everything was pretty good. Nothing amazing. I started to appreciate Mac's more as the tour continued. I kind of wished I had some turkey gravy for the fries - only because it would be delicious, not because I thought they should. The burgers aren't what I think of when I think road side stand. The patties are bigger than most seasonal stands.

Amy - Super friendly, the fries were a huge portion, homemade and hand cut. The cheese was good and substantial and the burger fit the bun. The bacon was crispy (yeah!) and lots of cheese. The bun was good, maybe grilled a little, nice size.

Casey - Employees are really nice, when you order a small homemade fries it is really big.

Quick ride into Latham brought us to On The Farm. If I am not mistaken, On The Farm won the first Tour De Soft. We didn't go on that tour. We've been here several times for ice cream, never the food though. There was a little confusion when we ordered. We had thought they had an OTF (On The Farm) specialty burger so I ordered the OTF burger, a plain cheeseburger and a small fries. This came in at $9.50. What we got was a cheeseburger, a plain burger and a fries because there is no OTF burger. 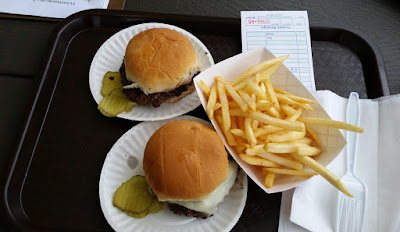 Now, I'm not holding that miscommunication on them, that's on me. It would have been nice to compare bacon cheeseburger to bacon cheeseburger, but it wasn't meant to be. That said, the plain burger was under seasoned. The salt from the slice of American cheese really helped the cheeseburger. Bacon would have helped too.  The fries were unsalted and improved with some added on top. All in all though, they were decent, greasy burgers. Definitely needs the cheese and would probably be even better with bacon.

Amy - Would have liked to try a bacon cheeseburger but got the OTF, Meat was good and flavorful, fries OK but not great, needed to be salted. Bun good.

Allison -  Fries needed to be cooked more and they needed much more salt, burger was pretty good but no OTF burger :(   (side note: I hope it isn't weird that I'm proud of her French fry assessment)

Casey - needs salt; didn't put salt on when the fries were warm so salt kept falling off. (I think Casey was more into the French fry portion of our tour)

Three down, two to go. A quick trip up the Northway to Exit 8 and we were at the Country Drive In. They are pretty well known for their onion rings so we added that to the order and got a cheeseburger, a CDI (Country Drive In) burger - which is where the confusion came from earlier, a small fries and a small onion ring. This came in at $16.59 but if you take off the $3.99 onion rings that brings it more in range with the other stops. 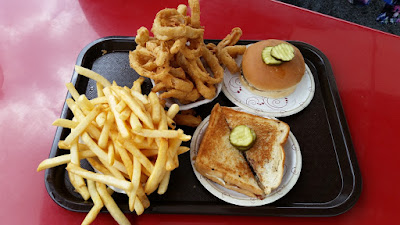 Again, no salt on the fries and they weren't very good. I thought the onion rings were good, but not amazing. I didn't like the cheeseburger at all. This was the first flamed broiled burger of the day and it had that off char taste you get from cooking a burger in grease flare-ups. The CDI burger was better, it was a bacon cheeseburger on grilled toast (although Steve N made a good point that technically it's a patty melt and not a burger). Overall, I was underwhelmed but I'm curious about the ice cream side of the drive in.

Amy - Unsalted fries would have been SO much better with salt. The CDI burger was a nice burger on the bread, nice balance of cheese & bacon with burger & bread & grease. ONION Rings were grand! Crispy, tasty and large portion.

Allison - CDI burger wasn't on a bun - it was bomb! had lots of cheese, cheeseburger was dry, fries were unsalted, onion rings are bomb! (the girl likes her onion rings and apparently saying "bomb")

Off to the last stop, Jumpin' Jack's in Scotia. We come here at least a few times a year. It's on the way to my in-laws and we've come for a water ski show too. Little bit of history - the first time Allison really got "walking" was at Jumpin' Jacks. I messed up the order and forgot the fries. So I went back to get them. One cheeseburger, one Jack burger - which is a double decker cheeseburger with cole slaw and then the fries. This was $12. 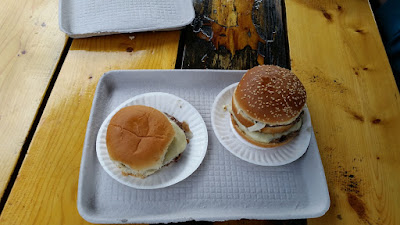 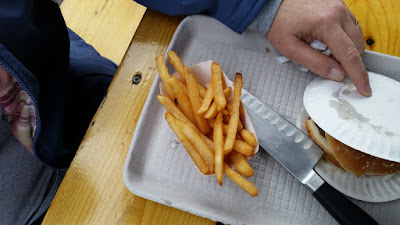 More unsalted fries. I thought everything was disappointing. The cole slaw really helped the Jack cheeseburger. I usually get a clam roll and onion rings when when I'm here. I think Jumpin' Jack's is more about the memory than a great burger. I can't go there without looking at where Allison teetering around and getting some speed. There a sense of nostalgia to the place. Like it's lost in time, but the food isn't great.

Allison - No salt on fries, but when we put salt on them they were good. burger was really good, beef was just alright; they always have long lines.

The final part of the scoring was "Which was your favorite and why:"

I thought Mac's had the best burger, best fries and was a decent value. I'm surprised. I much rather pay $10 for the Mac's experience than the $12 Jumpin' Jacks. And I was also surprised by how little I liked Jumpin' Jacks when compared side by side to other stands. At the start of the day I thought Jumpin' Jacks would be my favorite. I expect to be at Mac's at least a few times over the summer.

Amy: Mac's. The bacon cheeseburger was the best. The bacon and homemade fries made it!

Allison: Mac's because their burgers were good, the bacon was awesome and the fires were salted and good.

Casey: Mac's because they gave you a large amount of fries and had delicious bacon cheeseburgers. The employees were also very kind to their customers.

We voted as a block again. I'm not sure how much that skews the whole tour. There was a pretty good turnout so Daniel has his work cut out for him in tallying up some results. I look forward to seeing how other people scored the day. I'll post an update when the official results are in.

UPDATE: Here's a link to the official tour results.
Posted by Jon in Albany at 12:29 AM