We have Liftoff: Another Pizza OVen Update


At the end of the last update, the milestone reached was closing the dome. What remained was the entry which includes two support columns that get filled with concrete, two arches, a way to connect the two arches, and a way to connect the vent to a chimney anchoring plate I bought. Well, I bought the whole chimney system already and that is one of several reasons I can’t park in the garage. The chimney system includes the already mentioned anchor plate, a 5 foot piece of double walled stainless steel chimney pipe, a two piece flashing system for the roof, a chimney cap and spark arrestor. I’m pretty sure the spark arrestor will be overkill, but it isn’t the first thing I’ve way over designed for the oven.

I started by laying out and dry stacking the columns. The goal was to leave a 1.5 inch “reveal” around the arched opening to the dome. The idea is that you can make an oven door that slides into the dome arch and seals on the 1.5 inch reveal. I also picked up some carbon fiber gasket – similar to the stuff the helps seal a wood stove door- to create a small air gap between the dome and the arch. The gap, which may or may not actually be necessary, is supposed to prevent heat flow from the dome brick to the entry. There are two camps on the gap issue: those who have one thinks it works great, those who don’t have one consider them useless. I fall in the middle. It probably isn’t useless but it probably doesn’t matter too much. With or without it, the oven will still work.

I ran a bead of fireplace glue around the dome arch and pressed the gasket material into it. The glue goes on with a caulk gun and it seemed like there were some water pockets in the tube. It threatened to make quite a mess, but I dodged that bullet. Here’s the installed gasket. 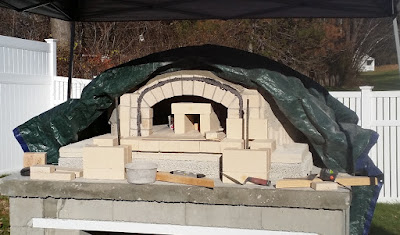 The two columns press up against the gasket leaving a tiny air gap. I dry staked the columns to get a feel for how they would be installed. Here’s the big problem. The chimney pipe is 8 inches in diameter. The anchor plate is a 12”x12” square. The bricks are 9 inches long, 2.5 inches thick and 4.5 inches wide. I wanted the gap between the two arches to be about 8 inches to catch all the smoke to send it up through the chimney and away from my face. So if there are two arches with an 8 inch space between them, and each arch is 2.5 inches thick, that’s 13 inches and the bricks are only 9 inches long. Plus I’ve got to bolt/screw this anchor plate on somehow.

My plan was to make the arches 8 inches apart, connect them with a 9 inch long brick with a half inch notched at each end and make the anchor plate fit where I wanted it. It hasn’t happened yet but there will be some cutting of the anchor plate.

After a long day going back and forth about how actually assemble the entry, I just went at it. And put it together. I built most of each column (which has a piece of rebar glued into the slab below because of design overkill), built the rear arch, then finished the columns and assembled the front arch. When I finished, if was after 8 and I was working under lights. 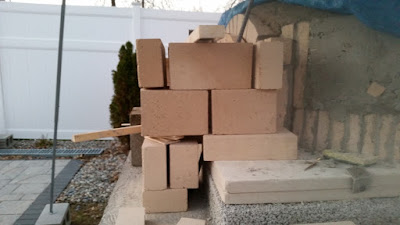 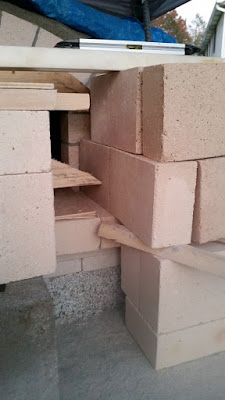 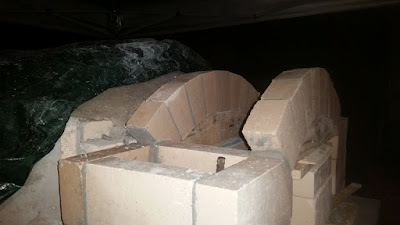 Then next afternoon, I went to take out the arch forms and touch up the mortar if needed. I broke the front arch. Into 3 pieces. The cursing was loud and plentiful. Thanksgiving was coming, there was house cleaning, shopping  and a long list of stuff to do. The oven went on hold.

This last Thursday, I took a day off to work on the oven. As it turns out, the rebuild of the front arch came out nicer than the original. 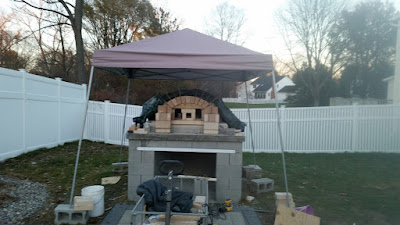 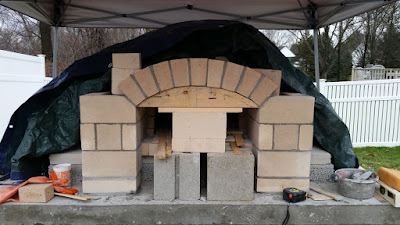 Once the arch was set I laid out my chimney anchoring system. I’d have the bolts go through a brick leaving at least an inch – I don’t want to risk splitting a brick with the bolt. To make that work, I had to make semi-circle-ish cuts in each brick. I clamped to bricks together and used trusty Ron the Wet Saw to cut the same shape in the two bricks. By varying the height of the say and pushing the bricks back and forth I made cuts that eventually worked.

Side Story: one of my neighbors had a contractor that was doing some work in their yard as I, dressed in brick dust covered clothes, dragged Ron the Wet Saw out of the garage. Their foreman came over and asked if I was good with “that thing.” I told him that I got by, but I wouldn’t say I was good with it. Then I showed him the oven and we talked a little. I guess if you have a contractor’s saw (because really, what kind of idiot would buy a saw this big to decorate their garage?), people think you are a contractor.

Back to the vent. With the cuts made, the anchor plat fit nicely but the original holes for bolts were not going to work. The plate is 12 inches wide and I’ve only got 9 inches to work with. I picked spots and drilled holes in the anchor plates where I wanted them to be. Once they were drilled I put the pricks and anchor plate together and marked where the holes needed to be in the bricks. A masonry bit went through the pricks pretty easily. Using stainless steel bolts, washers and nuts it all fit together and was pretty strong. 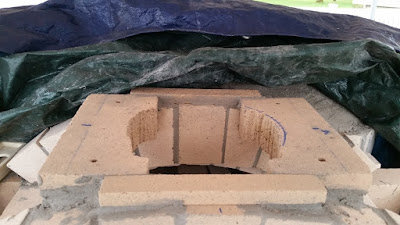 Bricks for connecting the anchor plate

The notched ends to a little angle grinding so they met the curve of the arches well but everything centered and mortared in level. Once it was set, I un-bolted the anchor plate so I could work on closing the gap between the two bricks. The pieces I used are pretty small but I think they will work well. They just need to prevent smoke from sneaking out. After that, one more notched brick on each side of the anchor plate and a final brick at the end of each arch to seal it up. After work on Friday, I put a little bit on insulation scraps inside the column in case there was any heat transfer across the gap and then filled them with concrete. 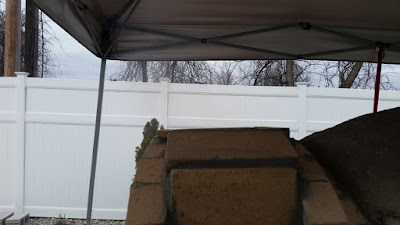 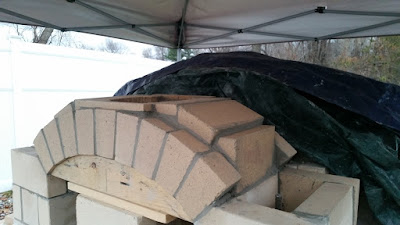 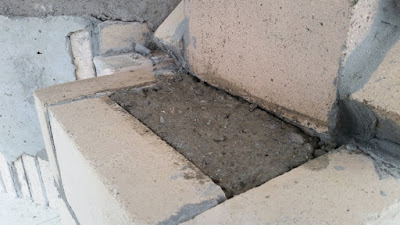 The oven construction part of the project is done. On to curing. 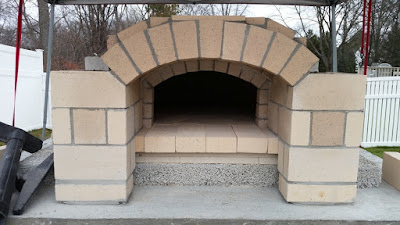 Curing is a misleading term. Everything in the oven is already “cured,” meaning hardened and at design strength. This is more slowly driving excess waster out of the oven. Steam takes up more volume than liquid water so heating that liquid quickly into steam could produce many cracks. To give credit where credit is due, this is an abridged explanation based on a post written by Stonecutter on the pizza forum. It’s honestly the best explanation I’ve read in years of reading through sites.

My driving extra water out plan is to have several small fires without the insulation. By small, I mean not heating anything about 300 degrees and getting to that 300 degrees slowly. On Sunday, December 4 2016, I lit a fire in the oven. I started with just brown paper bags from Trader Joe’s and slowly worked up small chips of wood and eventually got to small pieces of kindling. I was so focused on building the oven, I completely neglected to stock up on some wood. I’ll need to fix that soon. For now, a bag of firewood from Stewart’s did the trick. Over the course of about 90 minutes I burned one log out of my bag o’ wood that I kept splitting into tiny pieces by hitting a hatchet through the log with a hammer. It was fun. It was thrilling. I can’t wait to do it again. Unfortunately, I think it has to wait until Friday. This week is pretty booked up. 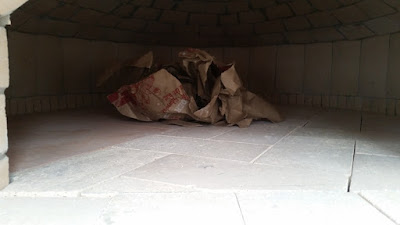 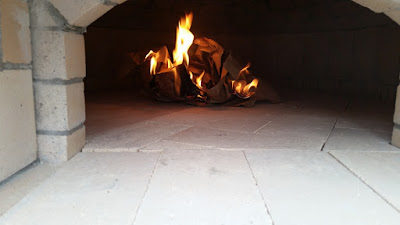 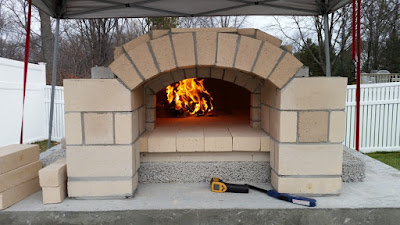 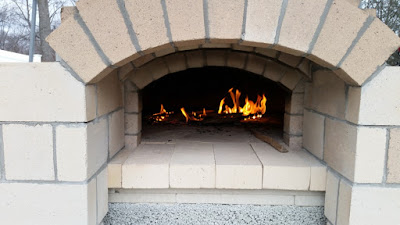 As I was making note of December 4, 2016 as a pizza milestone for me it seemed very familiar. And then I remember it: December 3, 2015 was the day that Jay of OG Woodfired in Buffalo, graciously invited me onto his food truck and I made my first wood fired oven pizza. 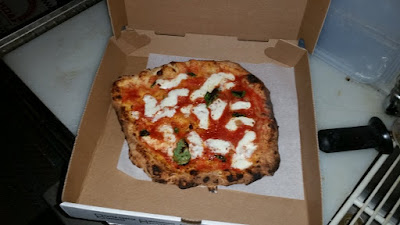 I have to come up with something cool to do next year on December 5th.

Add to Anti-Banner
Posted by Jon in Albany at 7:32 PM