Ever year I take a look at the Girl Scout cookie sales and every year, they are pretty much the same percentage wise. Looking at the entire troops sales to date:

And here is all that data in a pie chart because...well it was already in Excel so why not. 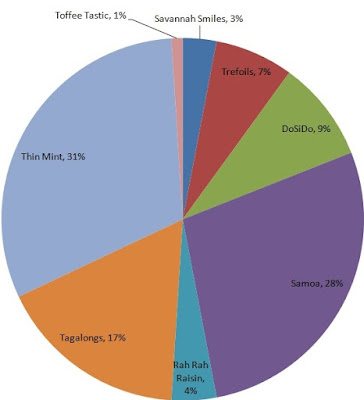 Thin Mints continue to dominate with Samoas (a personal favorite) trailing slightly behind. Keep in mind Toffee Tastic is gluten free and cost an extra buck so clearly sales aren't going to be huge. One thing I've noticed, especially at booth sales, is that some people are fiercely loyal to their favorite cookie. For example,  one woman that stopped at the troop's table in Crossgates, said she'd be right back, went to an ATM for cash, and then bought 5 boxes of Rah Rah Raisin cookies.

Cookie Sales Demographic Fact: Men between the ages of 18 and 25 really have a thing for Tagalongs. To the point where when a guy wearing a SUNY tshirt walks up to the table you could say, "How many boxes of Tagalongs would you like?" Usually the answer is 2 boxes. One box is immediately consumed while walking around the mall, and the other box probably gets eat later that night. During the last booth sale, an out of town men's lacrosse team was in the mall killing time. After they walked past the table, they were now killing time with a box of Tagalongs.

It should also be noted that people shopping in Crossgates are very generous with people often stopping just to donate money without buying cookies or spend $5 on a $4 box of cookies. If you are looking for some Thin Mints or Samoas or happen to be a 20 year old guy needing a Tagalong fix, the troops last scheduled booth sale is tomorrow afternoon in Crossgates Mall in front of the Starbucks near Uno's and Best Buy.