We've been vehicle shopping since before Christmas but it really took off in January. Shopping for a car is terrible. Just truly terrible. You constantly feel like everyone you talk to is trying to take advantage of you. The most blatant example of this was during a negotiation on Saturday. If the sales manager had treated us decently, we would have bout a car that afternoon. But he didn't. Felt like he was trying to take advantage of us. His opening offer for our trade-in was $250. We had already been offered $1000 from a car wholesaler when looking at used cars on his lot. The tires on our Explorer are worth more than $250. Donating the car to a charity would be worth more than $250 to us...and a charity. After 40 minutes of "let me talk to my manager in the back" bullshit our trade was suddenly worth $1500. I wish you said that in the first place.

We walked. Probably never to return to that dealership.

But this isn't about getting a new car. It's about saying good bye to our old car. It is very bittersweet.

My first car was a handed down, 2 door '84 Honda Civic hatchback. I loved that car. Even occasionally hugged it. In the winter of '92 when my wife and just started dating, the timing belt broke while I was driving on I-95. The car held on for awhile longer but was never the same. That did some damage. The next car for me was a '95 Saturn. It was 1995. Everyone bought a Saturn. The car was good, reliable and lasted a long time but I never loved it like that Civic. Reminiscing earlier today I said it was my "rebound" car from my first auto love.

When I got married, I had the Saturn and my wife had a handed down F-150 pickup. My sister-in-law called them Beauty and the Beast. The truck was Beauty. I don't know what was wrong with the wiring in that truck, but every year to 18 months, it would fry a battery and alternator. They would both be under warranty and we got pretty good at swapping them out.

My wife was pregnant with our first child when Beauty went under the weather. We need a good, reliable family truckster. We got this gold 2003 Explorer used with about 23,000 miles on it in the spring of 2004. I drove it to the hospital with my wife in labor for both our children. I vividly remember those drives. Car seats left permanent marks in the back seats. We set up makeshift beds in the back so the kids could take naps down at the lake.  I once got rear-ended with both kids in the back seat. I was a little sore, but we were all fine - I called the accident a successful test of a 5 point harness child seat. Plenty of fun in there too- road trips, a few trips with 3 adults, 4 kids and a dog crammed in there, beach vacations. Here's her good side. The passenger side has a bit of rust at the rear wheel well. 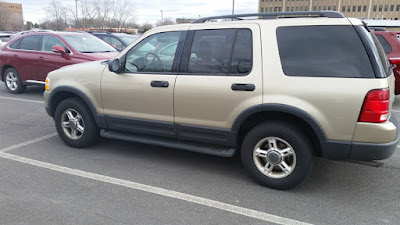 I'm incapable of keeping the same radio station on for more than a song (when I'm alone - I wouldn't constantly scan the stations slowly driving a passenger insane). My hand wore out the plastic beneath the preset buttons. 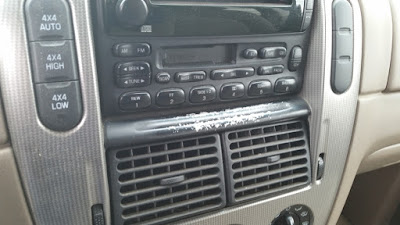 I've been driving that Explorer for two months shy of 12 years and now its future is probably a parts car or scrap. So long Ford Explorer. You were good to us. Thanks for the memories.

We got a minivan. Seems nice enough. I plan to drive it for the next 17 years.
Posted by Jon in Albany at 12:28 AM