Every now and then, I do something pretty stupid and wind up hurting myself. The last good one was a few years ago. I was in a rush, a drill was involved, and I did a very nice job cutting up my left thumb. At the time of the drill incident, it hurt. It stung. It bled. It looked ugly.

I went to an urgent care. They looked at my thumb. Cleaned it with stuff doctors use to clean cuts. In the end, they basically covered my thumb in Neosporin and put on a fancy band aid. One day this past February, one of my kids was home sick. So after I cleared the driveway (because it seemed like I had to clear the driveway everyday in February), I went with shovel in hand to knock down a few icicles. A few came down easily and I moved onto a fairly big icicle. I hit it with the snow shovel. Nothing. Hit it a little harder. Nothing. I took a good wind up and hit it again. It came down. But in hitting it hard, the shovel went a little further than I had anticipated. As the icicle was coming down,  it grazed my right ring finger and cut it.

At first glance, I knew it was a fairly deep cut, but it was nothing like the drill incident. It looked like I had done something stupid with a knife - which also happened once during a moment of complete stupidity. I washed the cut out, put a little pressure on it and the bleeding almost instantly stopped. I figured Neosporin and a band aid then I sat down on the couch and watched The Price Is Right with my daughter (because of course that's what you watch when you're home sick). The cut healed pretty well, took a little while but it was just an annoyance. After 3 weeks, the cut was gone but there was still a little bit of swelling. Then I noticed that the tip of that ring finger wouldn’t straighten out. Sadly, I really only noticed this when stretching out pizza dough. If it wasn’t for making pizza, I wouldn’t have given it another thought.

I went to a doctor. I was basically instantly diagnosed with a torn ‘terminal tendon.’ The fix is to keep the front halt of the finger in a splint to immobilize the knuckle. For a minimum of 6 weeks. Maybe 10. I have 3 of these little plastic splints to cycle through. So the big nasty cut that hurt and looked gross is basically a boo-boo that needed a kiss, and the minor looking, almost pain free cut required xrays and a splint.

Dammit. If I had just put the pair of gloves I was wearing back on, this is barely a bump. So stupid. On the plus side, I can still make pizza with the splint on, so I got that going for me. Which is nice. 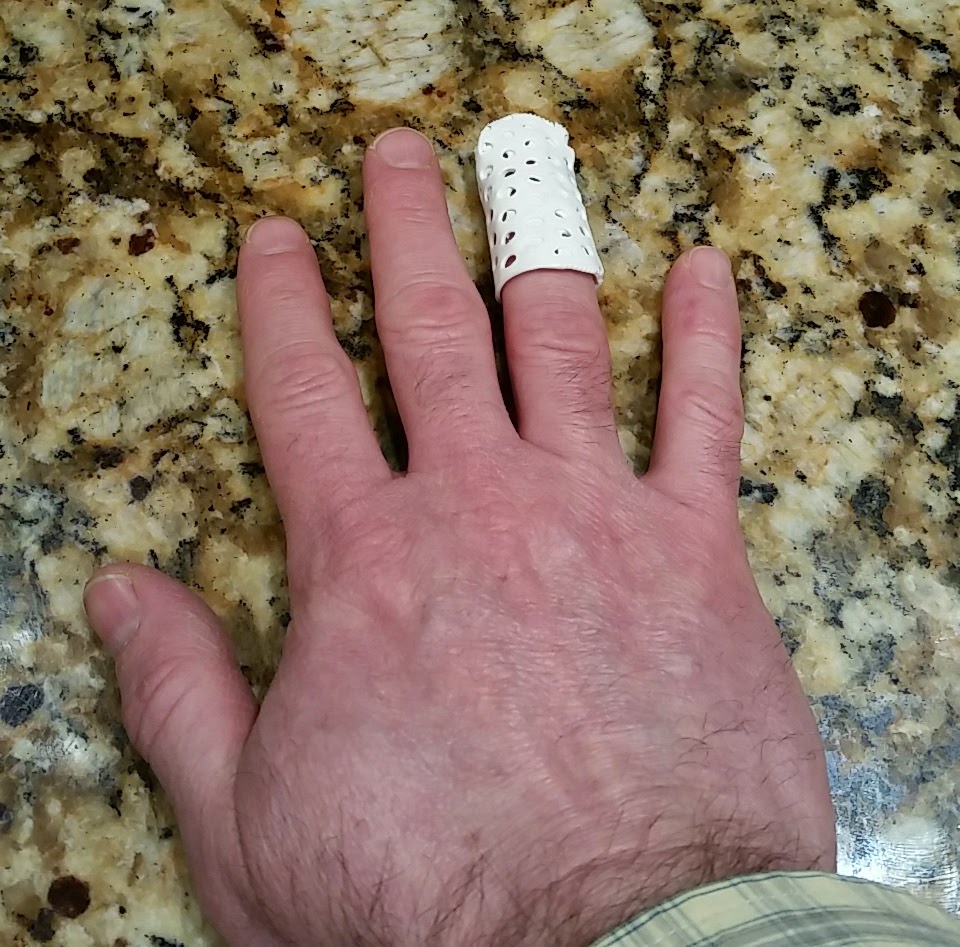