The past few weeks have been nuts. The night before we left for a Vermont vacation, we submitted a bid on a house. As we were packing to leave, we received an email rejecting our offer. I replied saying that this was as high as we were going to bid, think about, show the house some more, we're leaving for vacation and we'll check in when we get back.

About a hour later, my phone chimed and we received an email accepting our offer. The day we came home, we went to contract. Since then it has been meetings at the bank for a mortgage application, trying to get rid of stuff to avoid packing it, packing stuff up, an inspection, another meeting at the bank, and school started too...hectic.

During the chaos, we're preparing our current house so it can get sold once we are out (someone please buy it). Two walls of the basement have been prepped for painting (I almost did the final wall tonight, but laziness got the better of me), this past weekend we painted the deck, pictures are coming down and the holes are getting filled with joint compound. The to-do list is fairly over whelming, especially since the next month of Sundays include 5 to 6 hours centered around softball double headers.

This past Saturday afternoon, after painting the deck we attended a neighborhood block party. IT was really nice. Felt a little stupid meeting some neighbors for the first time while expecting to close on a house a mile away any day now. The event was a smaller version of one that occurred annually in the neighborhood of my youth.

Someone painted bases on the road and there was a lively kickball game going being played. One of my neighbors commented about how that brought them back. There didn't used to be nearly as much organization to after school activities for kids. This was a neighborhood full of kids playing kickball on a dead end street. Happened everyday for years and years and I can't remember the last time I saw it. One neighbor recalled SPUD. I remember playing SPUD but for the life of me can't remember what the game was. I recall a ball and lots of running as the ball got thrown up in the air. What the hell was SPUD? The event made me want to organize something similar in the new neighborhood. Maybe...talk is cheap. Writing something on a blog is even cheaper.

So as I look forward to many aspects of moving into a new space, there are many things I will miss about our current house. Trying to answer, "What if I miss our old house?" isn't easy. Hopefully the kids will handle the change well. We tried to minimize the impact on them. They'll be going to the same school, just on a different bus.

Change is coming...just as soon as the lawyers and bankers can pull it together. 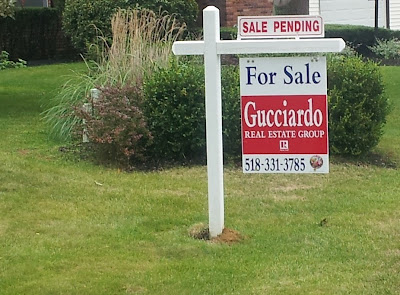