Nice day for a walk

As luck would have it, I had to go to Long Island on Thursday for work. Done for the day and staying at a hotel about a mile from a train station, I set off with my co-worker Harry for a long night in New York City or New York City!?! like in the old Pace Picante Sauce ads.

The train took us into Penn Station during rush hour. Don't know if you have ever been there, but a shit-ton of people are there for the evening rush hour. Escaping to the surface, we began our walk. From Penn station down to MacDougal Street in the Village (about 1.5 miles). We had reservations for the 10:00 show at the Comedy Cellar. We were a few hours early so we headed up the block to Artichoke Pizza Basille. This is one of the pizzerias owned by two cousins that recently had a show on the cooking channel.  (I snapped this picture of the outside a few hours after we ate there) 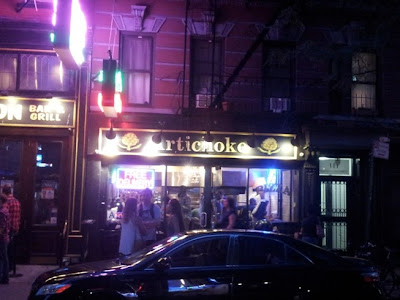 The two guys working there were very friendly. One was pretty tired - he was working his way through school. The other was everything you would expect a New Yorker to be. Nice, but gruff and quick with a joke. They had stacks of flour up front. Exactly the same as the flour I picked up a few months ago at Restaurant Depot. Depending on the time of year and the day (NYU is a few blocks away), they use 4 to 6 bags on a weekday and 8 to 12 on a Friday or Saturday. Pretty sure mine will go stale before I run out. 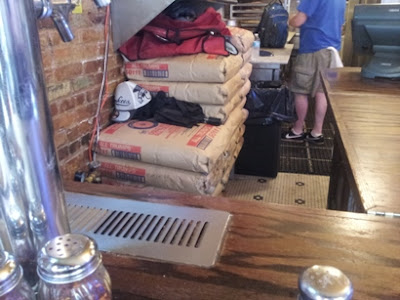 Here's the artichoke slice they are famous for making. 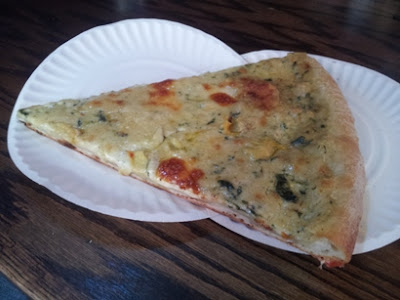 It tastes like really good artichoke dip on top of really good bread. Delicious, but very salty. It should also be noted that there was "the soft glow of electric sex gleaming" in the corner. 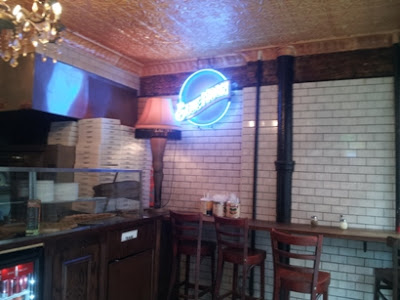 I tried their Margarita slice too. 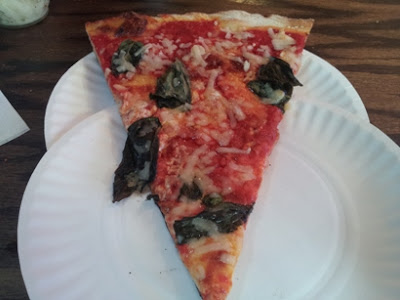 I enjoyed it. Also very salty and the crust is nothing like the crust on the artichoke pie. Overall, I'd say OK slices. There are probably better slices to be had in the city, and given the choice between this pizza or anything from Pepe's, Pepe's is better. Still, we certainly enjoyed Artichoke Pizza Basille. All my pizza nerd questions were answered: their ovens are set at 550 and I was encouraged to buy a wood fired oven for the house. Preaching to the choir.

Fueled with pizza and with hours to kill we walked down to the Freedom Tower construction site. Probably about another1.5 miles. Lots of nice architecture, the occasional breeze and some good people watching. Along the way I tried to tweet something to the All Over Albany site and manage to pull of my first Twitter failure. I saw this:

So I tweeted: Didn't know @alloveralbany had a restaurant in NYC.

Very confused, and apparently with no plans to open a restaurant in NYC, @alloveralbany simply replied: ?

Such a powerful piece of punctuation. Maybe I'm projecting, but the one character combines the sentiment of "I don't get it" with "Are you drunk?" I don't know how I managed to delete the photo, but I did and the tweet just became a confusing typo. I'd like to go on record for the 22 people that may or may not actually read my @JonInAlbany tweets, I was sober when I screwed that up. In my defense, it was hot and there was a lot of glare.

With my Twitter fail sent off into cyberspace, we continued walking until we were at the Freedom Tower. The building is beautiful. 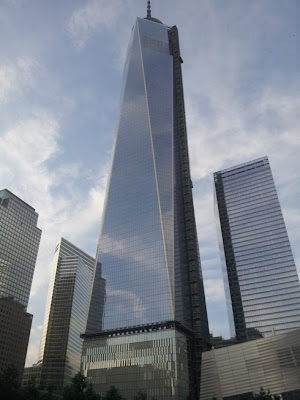 We asked a security guard if there was a way to still see the memorial and he gave us perfect directions. We were allowed in with the last group of the day. The footprint waterfalls are hauntingly beautiful.  Several of the names along the rails had been recently visited with a white flower left behind. 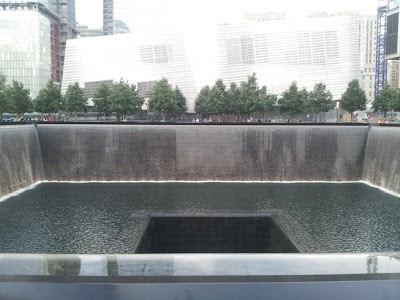 We started working our way back to the Comedy Cellar. The show was sold out so we were going to have to get there early to preserve our seat reservation since there was a stand-by list. So after another mile and a half, we were back at the club. With a little time to spare, we went into the Olive Tree. It is the restaurant above the Comedy Cellar. 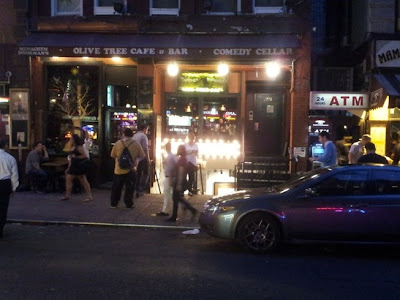 When we walked in the bar, two musicians were in the middle of playing a TV theme song medley. We enter to the theme from The Greatest American Hero (I loved that show), it was backed up with the Golden Girls' Thank You For Being a Friend, the theme from Cheers and then they played one more before taking a break. The name of the group: The Jewbadours.

We took seats at the bar next to The Table. The table is a comedians only table. There are a lot of stories that revolve around The Table.And now there is a weekly podcast recorded at The Table. Would you like to see the majesty that is the myth, the legend, The Table? Here it is: 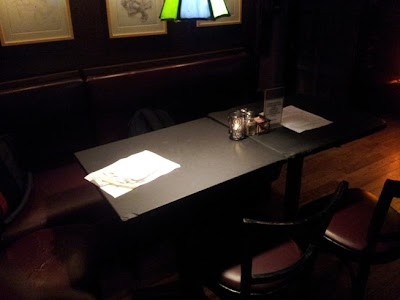 Nice, right? Another view for you: 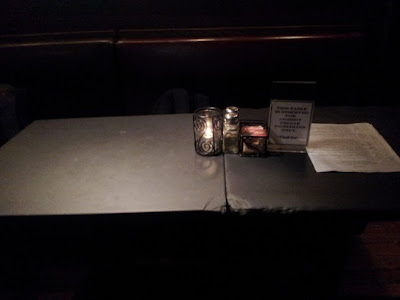 After a nice conversation with the bartender and one of the restaurant managers (and a Scotch), we headed out to check-in and get in line for the show. I went to get in line and Harry went to check in. Harry was asked if he wanted to sit up front and he said, "Yes." Now, I've sat close before. Up front at the Comedy Cellar is UP CLOSE! Like, my feet could touch the microphone stand. At one point, during one comedian's set, my feet were kind of getting tangled in the mic wire. When Sherrod Small bent over and looked at me, I think he was about a foot away from my face. There were 6 standups and a host. Everyone had some very funny stuff. Dave Attell was there and had to deal with a drunk lady that seemed to throw him off. He seemed torn between destroying her and trying out some new material. Then he kind of did both and didn't seem happy with his set. Judging by his offstage scream, he wasn't happy. I'd never heard of Nick Griffin and he was hilarious. It was a great time. Tickets are $14 and you have to buy 2 things in the club. They could be drinks or food. We spent $70 including tip. Really not much more than going out to a movie and a few drinks. Given the option, I'd definitely choose the comedy club over most movies.

The show ran a little long, so we started double timing it back to Penn Station. If we didn't catch the 1:01 train, the next one left after 3:00. After a few blocks, we realized we were heading in the wrong direction and hailed a cab. Perfect.

Plenty of time at the station to get our tickets and roam the station a little. Did you know you can get good beer to bring on trains? I knew you could get eh beers, but one place had a ton of beers on tap. It was like $6 for a 20 ounce Bass Ale. Got back to Long Island, walked the mile back to the hotel and went to bed around 2:30.

Got up the Friday morning, spent most of the day collecting data from a bridge site (which required a few miles of walking) and headed home. Slept in on Saturday. I'd do it again and I'll have to check out our local comedy club too.
Posted by Jon in Albany at 11:46 PM