Last week I got/had to spend two nights in Watertown. I had only been once before and my impression wasn't that good. While it is true I have not explored Watertown thoroughly (it is tough to get around town when your only vehicle is a big box truck and the hotel didn't have a shuttle), the area surrounding the Salmon Run Mall - Exit 45 of of I-81 if you are keeping score at home - is Everytown, USA or Generica. Every store was a chain store. Sure, some of the chains were smaller than others, but chain stores.

The gym in the hotel was an elliptical and a bad treadmill. I'm not sure if it is operator error, but the belts on treadmills in gyms don't seem to slip on me while almost all treadmills in hotels do. Nothing like feeling you are going to blow your knee out while jogging. All the roads around the hotel were wide state highway type roads, not exactly fun to jog on. I noticed a Planet Fitness across the parking lot and stopped in to ask about a day pass. They said sure, it's $20. I said isn't that the same price for a month? They said, yup. I said, buh-bye and hit the roads.That just seems ridiculous to me.

Workers at the site we were visiting recommend the Texas Roadhouse and the Tilted Kilt for dinner. I didn't want to go to a chain steak house so we set off walking the half mile to the Tilted Kilt. 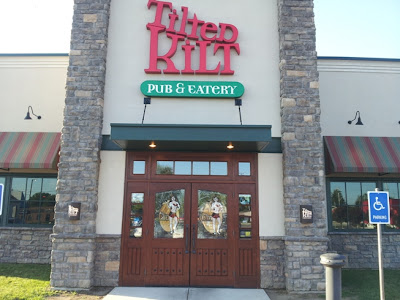 This place is like, well, it's like going to Hooters except probably offensive to some Scottish people. All the servers women and they wear a short kilt, short top/bra. The few men that work there are also wearing kilts. If the staff is going commando under their kilts, I've got to hope it is a health code violation. Here's the uniform proudly displayed on the menu. 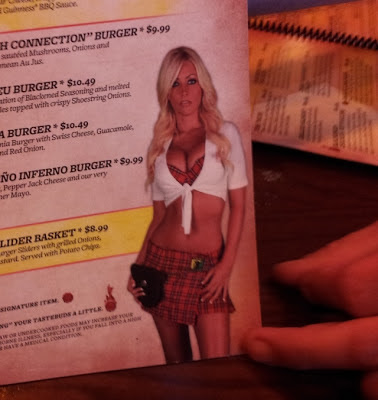 Classy, right? I should have gotten a burger. I knew the burger was the way to go. But I had eaten a burger the night before. I asked our server for a recommendation and she suggested the Gaelic Chicken dish. It was one of the house specialties. I'll say this about the Gaelic Chicken dish...the chicken was tender. I've got nothing else good to say about it. It was boil-a-bag boneless-skinless breast with a weird white sauce poured over powdered mashed potatoes.

I think the weakest aspect of this chain of all things Scottish is that they didn't have anything Scottish other than wall decorations. They had posters for McEwan's Scotch Ale but they don't serve it. You could get Dos Equis though. The Scotch selection was weak too. They had more Irish Whiskey than Scotch.

Yelp informed me of a dive bar (and I mean "dive" with nothing but respect and love) called the Time Warp Tavern. My phone said it was another mile and a half up the road. What the hell, we didn't have anything else to do. So we set off up Arsenal Street. About halfway there, I saw this. 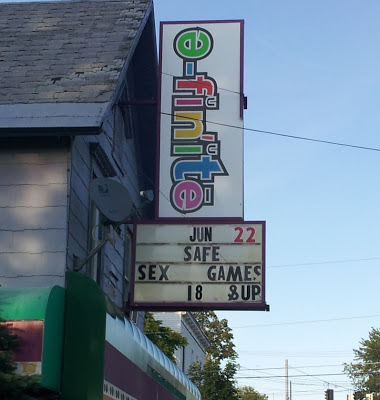 We left town on the 21st and I wonder how the party went. Think the police got called?

The Time Warp Tavern isn't the dive-iest dive bar, but a place with good character and everyone there knew everyone else. Beautiful, old wooden bar. A hockey game was on and we were having a good time. Before we left, we heard about a local band playing in the bar the next night and started our 2 mile trek back. Walking back, we stopped in at a bar with Frog in it's name. I can't find it in YELP. They had a lively ladies dart league going having a inter-bar match. In this bar I got to see a guy spit up a little on his way to full blown retching in the men's room. Don't worry about him, he kept drinking once he came out of the bathroom. From there, we finished the hike back to the hotel and called it a night.

The next day, we got up, headed to the site and came back to the hotel around 6:00. We washed up and started our two mile trek to the Time Warp Tavern. They had a small menu and we thought we'd give it a try. They were running a $2 pounder special ($2 for 16 oz. cans of a handful of beers). I ordered some wings and a beer when I noticed a bottle of Basil Hayden behind the bar. I switched the beer order to a bourbon. A very healthy pour of Basil Hayden was $5. I'm home.

For wings, they had the standard flavors - Buffalo, bbq, a few different glazes and one called Black Betty. We were told it was a local favorite. Black Betty style wings are fried, coated in a combination of bacon fat thinned out with a little ranch dressing and then grilled for a little char. Holy shit these were good. I tried to get a picture but it was too dark in there.

Full of wings and bourbon we started the long walk back. The NBA game 7 was still going on so we popped into the Buffalo Wild Wings next door to the hotel to watch the end. There we met two Olive Garden waitresses that had just gotten off their shift. Hearing their take on their customers was interesting. Older couples are cute, a lot of people that throw temper tantrums in there, and the kitchen apparently has absolutely nothing to do with unlimited soup, salad and breadsticks. And just to make me feel old, one of these waitresses was born in 1989, the year I graduated high school.

But my favorite part of the conversation was when one of the waitresses declared the talent level of Weird Al Yankovic was equivalent to Kim Kardashian. Sure she's wrong, but  my co-worker Harry is a fan and recently met Weird Al. I plan on reminding him of her declaration regularly. I'm laughing just thinking about it.
Posted by Jon in Albany at 11:53 PM