Well, I don't actually have an inner MacGyver but with help from some friends and assistance from  willing PizzaMaking.com forum member FeChef, I put together a DIY sous vide system. I am very pleased with how the system works. DISCLAIMER: I barely know what I'm doing. If you copy this, you're on your own.

The process began with seeking out a heating element. I tracked down an indoor turkey fryer on Craigslist and bought it. Turns out that without cracking it open to make some adjustments, the fryer element wasn't going to do it for me. Plus, the damn thing is so shiny and pretty I don't want to break it - I want to deep fry things in it.

After reading a several DIY sous vide articles online, a small water heater element looked like it would do the trick. So I went to Lowes to check one out. It was 10 bucks so figured I'd give it a shot. My idea was to drill a hole though a piece of stainless steel, thread the heating element through and cover up the electrical connection with a combination of shrink tube and electrical tape. Side note: I decided to uses stainless steel for the rust resistant properties completely forgetting that it is harder to cut and drill. During the development of this heating element, I went through a few hacksaw blades (I kept trimming the steel afraid to trim to much - 3 cuts later it fit snugly) and a drill bit. Here's the heating element: 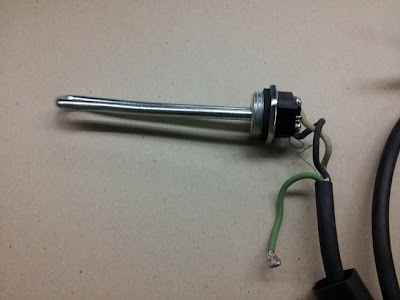 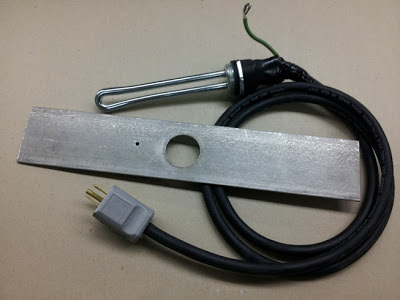 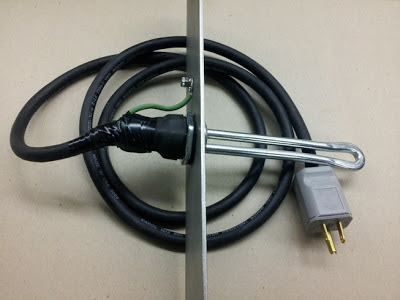 The piece of stainless steel started at 14 inches long and was slowly whittled down to about 13 5/8ths and fits snugly onto the rim of our largest cooler. My idea was that it could then be place on top of other, smaller coolers for jobs that needed less water. We'll have to see how well that works.

Next up was securing all the electronics. This was pretty much a parts list supplied on a PizzaMaking.com post about brisket. Got an outlet, a PID controller, an SSR and heat sink, a better PT100 sensor (temperature sensor - the PID controller came with one too) and a water pump for circulation. Assembly took 2 nights. It was pretty straightforward (thanks again to FeChef's wiring diagram). The delay was more in me putting things together and then taking them apart to try and put together a little better. 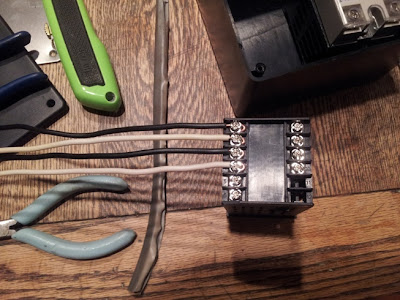 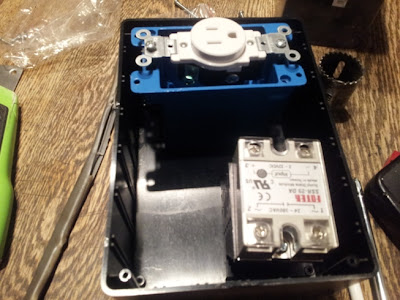 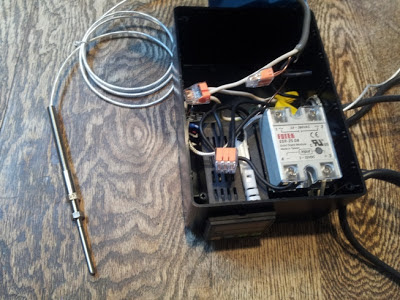 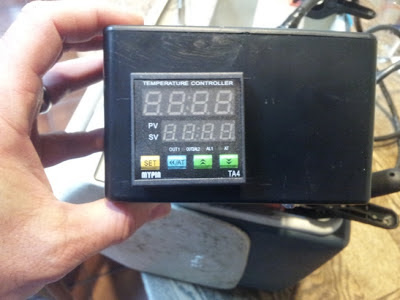 After some mandatory trouble shooting, I was off to the basement for some testing. I filled a cooler with some hot sink water, set up the heating element and temperature probe and took it for a test drive.  It held 140 what it thought was 140 degrees for a few hours. My instant read thermometer and the PT100 sensor differ by 2 degrees. I still have to put them both in ice water to see which one is off. 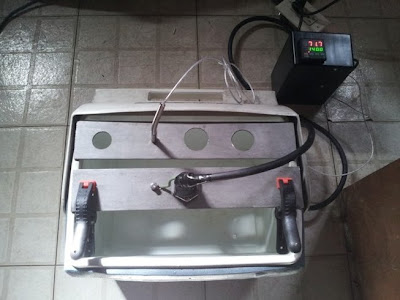 Today, I set it up in the big cooler with the water pump and cooked a sirloin steak in it. The box got hot during the heat up, but wasn't hot when cycling off and on to maintain the water temperature. A future improvement will include wither a cooling fan or additional heat sink. Here it is warming up on its way to 132 degrees. 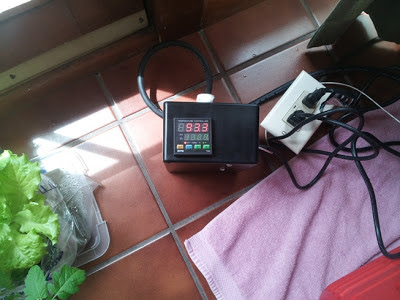 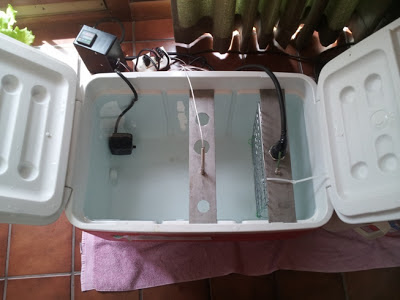 I put the steak in an old rib rack so it would float around. I also wire tied a baking cooling rack to the heating element to keep everything away. The water pump suction feet didn't want to stay stuck to the cooler walls so it ended up positioned and clamped to the wire rack. I put the heating element and temperature sensor on one end of the cooler and was able to close the the larger part of the cooler lid to hep insulate the water and slow down any evaporation during future cooks. 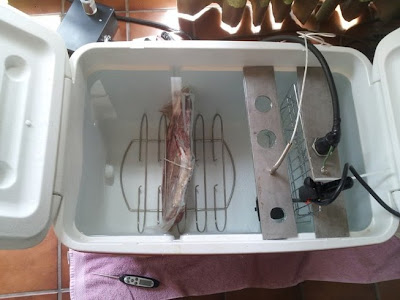 Once out of the water bath, I gave the steak a quick sear on the grill. Not exactly the most appetizing thing right out of the water. Looked better after the sear and I was left with edge to edge medium rare. 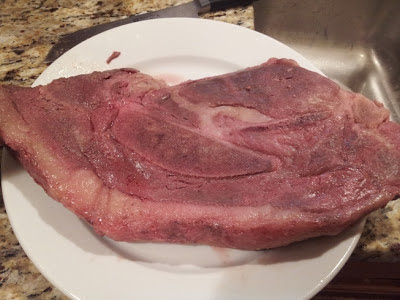 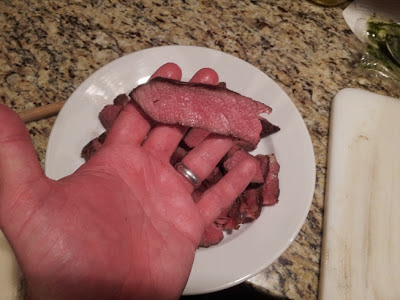 Definitely a toy I'll glad to have. There's brisket, short ribs and a few other things I'd like to try in here. Many thanks to FeChef, the Harries (would you believe I know two guys named Harry?) and Jim for their guidance.