This writing goals down thing might actually work. Since I wrote down some goals last week I've:
- worked out 3 times including a 5k almost all the way run
- got some information on upcoming 5k races (Thanks DelSo)
- got the kitchen molding primed and installed (I'm going to fill in the nail holes tonight) 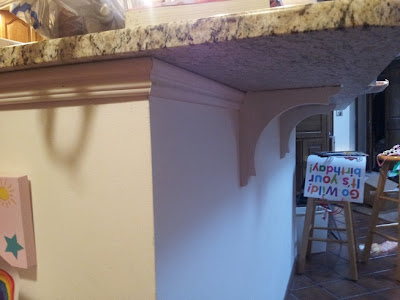 - most of the joint compound kitchen work is done, just a little touching up left in two spots but I have to keep waiting for it to dry
- and tonight I am also beginning a batch of Moderinst inspired bacon.

Adventures In Food has begun selling a bunch of locally made/grown products.  The list is here. One of the items they are carrying are pork bellies from Stillwater Farms. The 7.4 pound belly cost $5.50 a pound.  Can't beat the price for a pork belly that looks this good. 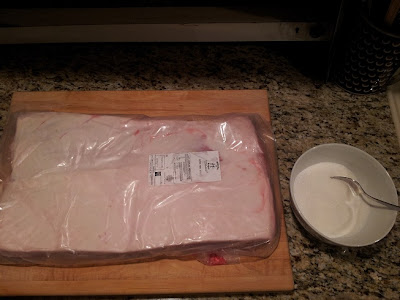 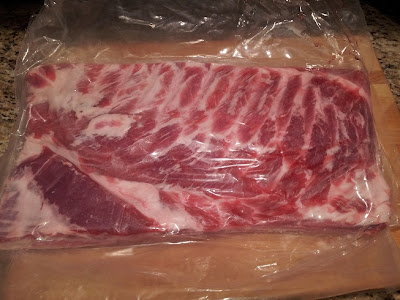 I took a closer look at the salt and sugar proportions from the Modernist and Charcuterie recipes. They are pretty similar. The Modernist recipe uses a little more sugar, but the Charcuterie recipe suggests adding other sweet ingredients (brown sugar, maple syrup, maple sugar) to taste. So, pretty similar. In addition to the basic cure of salt, sugar, and cure#1, the Modernist recipe included  Fermento, coriander, pepper, mace, star anise, and sodium erythorbate. I decided to break down the Modernist recipe and drop coriander, pepper, mace and star anise. I almost swapped out some sugar with brown sugar but the opted against it. We'll see how this batch comes out and then I'll start tinkering. Here' the belly covered in cure. 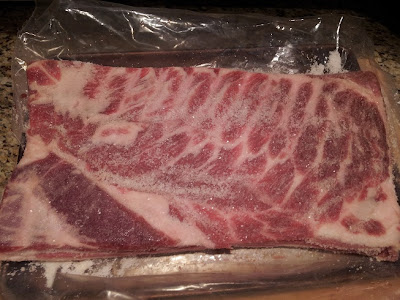 Once the cure is on, the belly gets vacuum packed and put in the fridge for a week, turned daily. 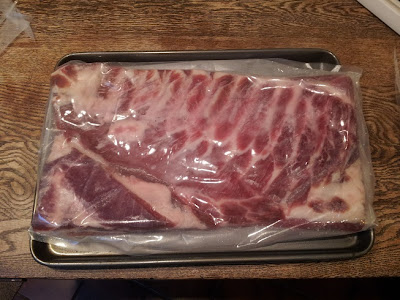