I kind of feel like I am handing in a homework assignment three days late...maybe I'll just think of this as extra credit since the Italian Sausage was made on time.

I tried the chicken sausage out of Charcuterie with a few changes. I cut back on the pork fat since it seemed like too much. It is a 30% meat/fat ratio but I didn't think the chicken thighs needed that much help. I skipped adding the wine, olive oil and vinegar. I had tried something similar with the original Italian sausage recipe and didn't like it. I also skipped the remixing after the grind. I prefer the coarser grind in the final sausage. All that being said, here's what happened in the kitchen: 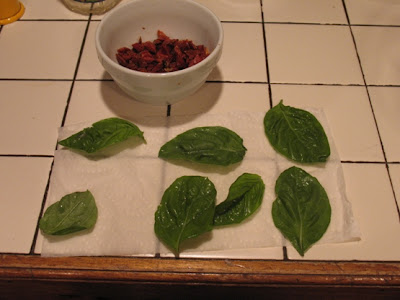 Chicken thighs and back fat. Would you believe I am actually starting to run low on back fat? 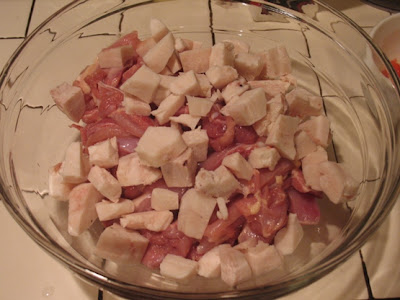 Diced, seeded tomatoes with minced garlic on the left and the salt/pepper on the right. 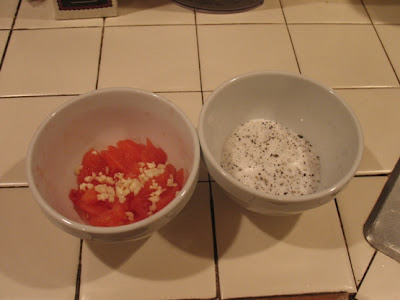 Mix it all up then grind. 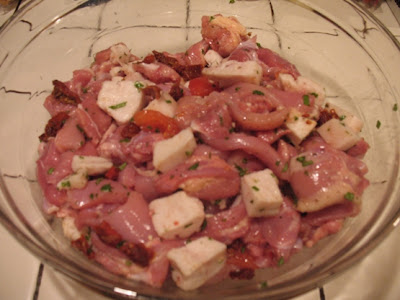 Into the stuffer and out come sausage. The chicken stuffs easier than pork. I ran out of rinsed casings at the end. Just meant a larger late night snack for the cook. 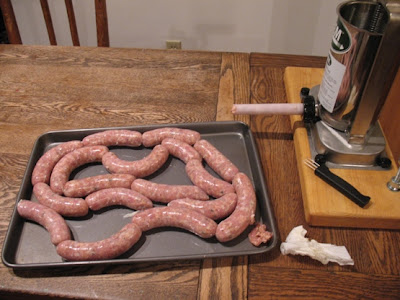 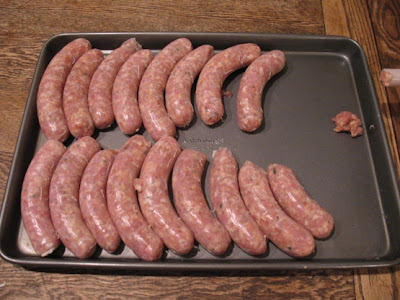 One thing that is more noticeable with the chicken sausage is that the flavors change significantly as the sausage ages. I'd argue it improved with some time. I tasted a little bit before stuffing to see how the seasonings were. I thought it tasted pretty good, maybe a little heavy on the salt, and the sun dried tomato flavor was pretty strong. After the stuffing, I fried up the leftovers. The sun dried tomato flavor was not as strong and it seemed a little less salty. A definite improvement from the original taste. Tonight, I grilled up a bunch of the sausages and froze the rest. 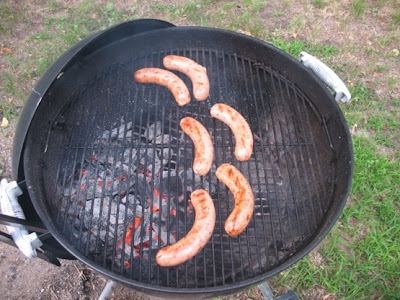 The wife was surprised that this is what I had made the night before. Got her rating "best chicken sausage she's had." The older daughter liked them too. The younger daughter was not impressed. She's not that into dinner in general and the sausage was no competition for the diced cantaloupe that was also on the table. Two out of three ain't bad. This will have to be made again. I'd cut back even more on the pork fat and reduce the salt a bit, but definitely a very tasty sausage.

Next month's challenge is blending. I haven't had the best luck with emulsified sausage. I blame my lack of ice maker. I guess it could be operator error too. I thinking about trying hot dogs but I've got to go through a few books before I start cooking.
Posted by Jon in Albany at 10:54 PM