This month I am planning to make bacon, pancetta and lemon confit. I am still having problems finding a pork belly. Struck out at the farmer's market. Found some heritage pork belly for $15 a pound (ouch). I ended up ordering some from a butcher in Clifton Park. They were supposed to call me back and haven't yet. I'll call Monday to see where we stand. If that falls through, I should be able to get one from Rolf's later in the week. Time is running out to get these into cures and have a finished product by Valentine's Day. I think the pancetta will be coming in a few days late.

I got some lemons and manged to get them into salt on Friday night. Two Meyer lemons and one traditional. It is a moment like this that really sets this blog apart from may other blogs. These blogs I am referring to have stunning, well lit photographs of beautiful food. Here-not so much. Earlier in the day on Friday, I donated blood. Then after everyone went to bed, I was on the couch watching Top Chef eating a bag of Original Flavor Goldfish. I thought, what could go better with Top Chef and Goldfish? The answer: mmmm, beer. Completely forgetting I gave blood, I opened a beer. It was very tasty. So I had another. And now I'm watching TV and starting to feel a little loopy. Show's over, lets get those lemons into some salt. I put a bunch of salt into dish that has a lid. Cut the lemons in half and buried them in salt. Looking at this bowl filled with salt, it occured to me that I should have taken a picture. Oops.

Here I give you 3 halved salt covered lemons in a white bowl on a white counter lit by overhead kitchen lights. The first example showcasing my photography skills completly washes out my subject with a flash. I had enough sense to turn the flash off and get another shot. If I ever get a pork belly, I'll try to take better pictures. 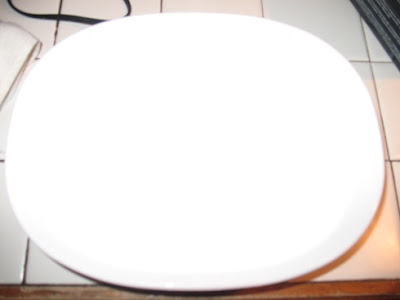 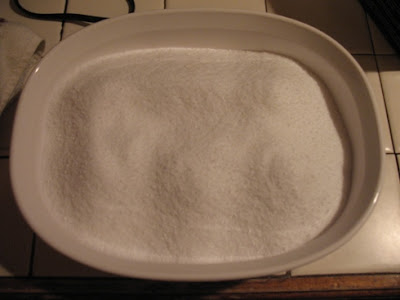 Breath taking, right? The bowl got covered and put in the basement. In theory, I will remember they are there sometime in late March. If not, I definitely remember in November because until now, the sole reason for that bowl to be in the house is to serve stuffing at Thanksgiving.
Posted by Jon in Albany at 11:08 PM