Making 2 kinds of bacon. I eventually found a pork belly. Not quite 10 pounds. The more square end will be smoked bacon. And the tapered end will be pancetta. I'll also have some trimmings for some sausage for the upcoming Rib & Pierogie Day. Unfortunately a number of conflicts are forcing a schedule change for that event. It won't happen this weekend but it will get rescheduled.

I started with pancetta. I didn't follow the recipe out of Charcuterie. I made a slight variation of this recipe (I skipped the nutmeg) used by one of my Salami Making Heroes, Jason Molinari. One thing that is great about Molinari's recipe is how it is presented. Everything is a percentage of the meat. This method is perfect for cooking with a scale. Just multiply each percentage by the weight of meat and start weighing. And if you are a nerd like me and put everything in a spreadsheet, just type the weight of the meat in the right spot, and the spreadsheet sets it all up for you. This is the method I use to keep track of all my sausage/salami adventures.

Starts with weigh the pork being cured. 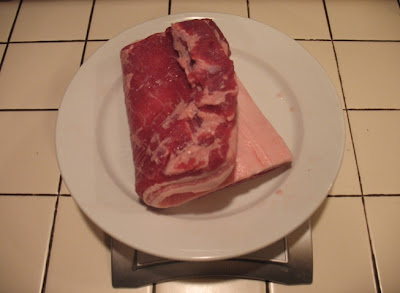 This piece weighed in at 1022 grams. Into the mini chopper accessory to a stick blender (stick blenders rule), I added the spices. In went peppercorns, juniper berries, bay leaves, thyme, garlic, and brown sugar. This went for a whirl. 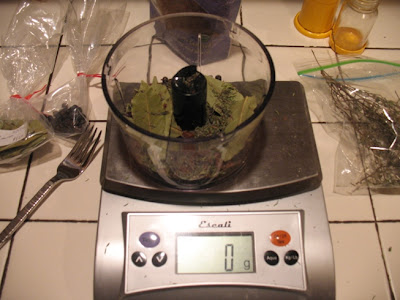 Then I added the salts, kosher and Cure#2. Cure#2 is a variation from the Ruhlman recipe. With the exception of previously made pancetta, anything I have hung in to dry had Cure#2. Using it makes sense to me but I should add that had I not been following a successful recipe from a good source, I doubt I would make the switch on my own. 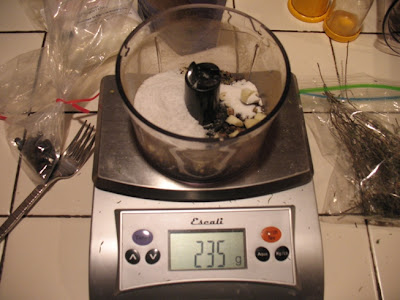 It all went for another whirl to distribute everything. I really liked using the mini chopper to make a cure rub. It smelled great and I think it is better than just mixing everything up with a spoon. 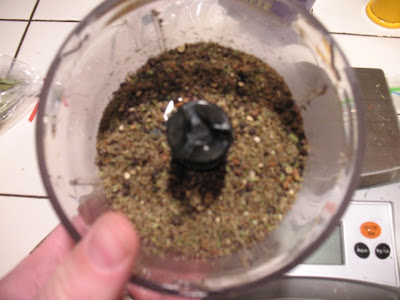 Time to rub it all over the belly, both sides got coated. Still smelled really good. 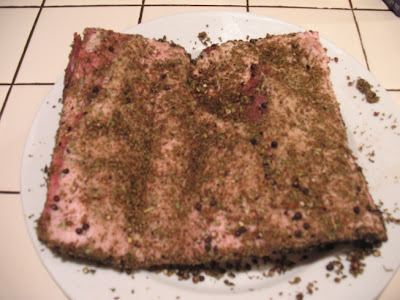 Then into a 2 gallon bag  for curing. I bought a bunch of bags with a slide to seal the bag. The slide is useless. So I fold the bag over itself, usually have a clip to keep it sealed and then put it on a cookie sheet just in case something leaks. 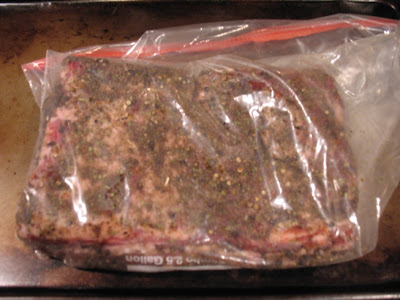 Once that was done, I moved onto the bacon. Again, being a nerd, a spreadsheet was used. The basic salt cure in Charcuterie makes well over a pound of cure (725 grams). I needed less than a cup. So using similar handy-dandy ratios I combined kosher salt, Cure#1, and sugar to make 100 g of cure. I should mention that any weights shown in the photos are useless - I used the tare a lot and I'm pretty sure this picture is showing the weight of the spoon. 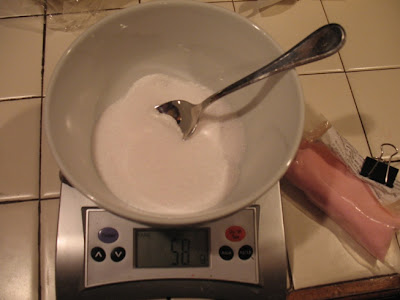 Here's the piece of pork belly ready for the cure and the trimmings waiting to be packaged for the freezer. 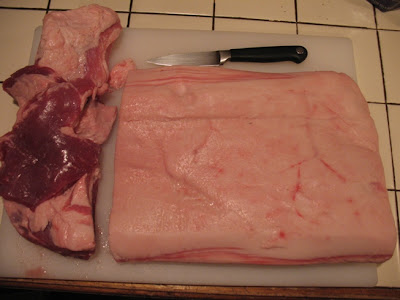 Another 2 gallon bag was used for the bacon and both packages were off to the basement fridge for curing. Next weekend, I'll smoke the bacon and hang the pancetta. The bacon will make the mid-month challenge deadline, but the pancetta and lemons will be a little late. 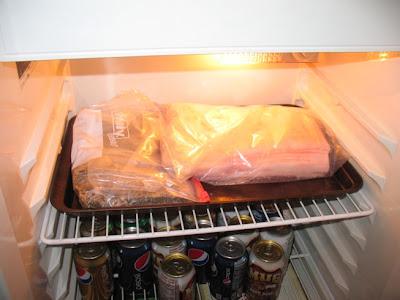 Speaking of Charcutepalooza, there have been a few developments. Those that complete all the projects are eligible for a pretty big prize. Judges include Chef Bob Del Grosso and Michael Ruhlman. Participants will also get a discount on meat from D'artagnan. If you care to read all the details you can do that here and here. Plus, the entire thing was written up in this week's Washington Post food section (Wednesday, January 26th). Very cool.