This all happened Monday night. It was time to grind, stuff and hang this batch of Tuscan Salami. The grinding and stuffing is pretty easy. The hardest part of that is cleaning up. The difference between a pretty easy fresh sausage and the more difficult salami for me is the butcher's twine. I still can't tie a salami nicely. That being said, I am pleased with how this batch of slami went into the chamber. I hope it ends up tasting as good as it smell now. Here's how I spent my Monday evening....

First up, I got some casings soaking. The casings are salt packed so they need at least half an hour to soak. I also flush them out a few times. The beef middles were very different than the hog casing. Probably to be expected since the two animals are also very different. I had expected a difference in size, but not a difference in texture. Here are the two types of casing soaking. Hog casing on left, beef middle on right. 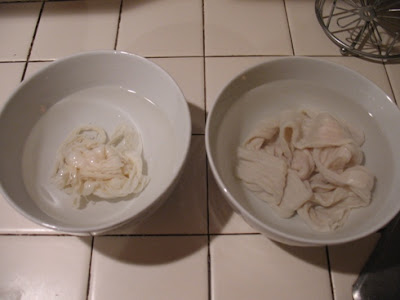 Next up, toasting some fennel to get added to the meat before the grind. This also smells good. 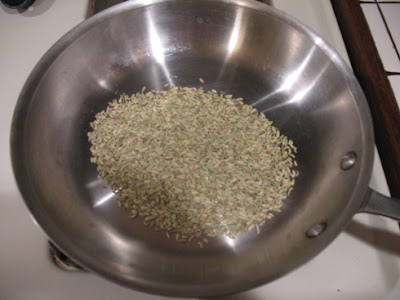 I tossed in the toasted fennel and started grinding. For the benefit of the camera, I only took a picture when I was done grinding. 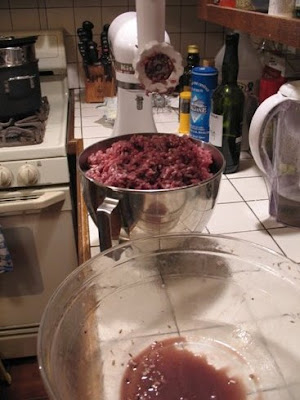 I split this up and gave the meat a quick mix with the paddle attachment on the Kitchen Aid. No pictures of that. Then it was time to flush the casings and get stuffing. Well, after cleaning up all the grinding stuff and taking a quick break. I did the the beef middles first. 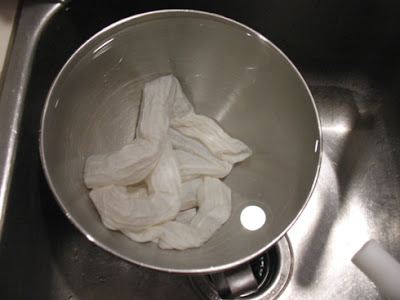 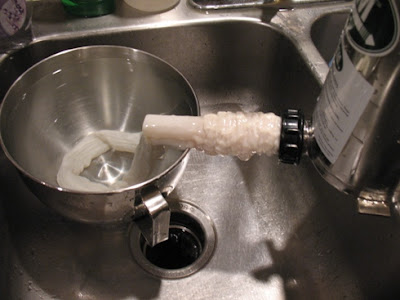 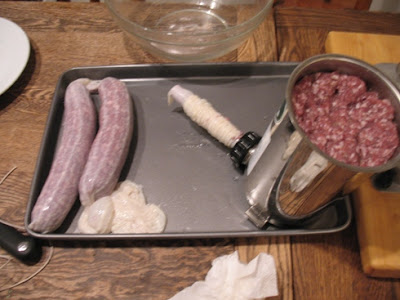 After stuffing two larger salami, I stopped using the beef middles and went onto the hog casings. 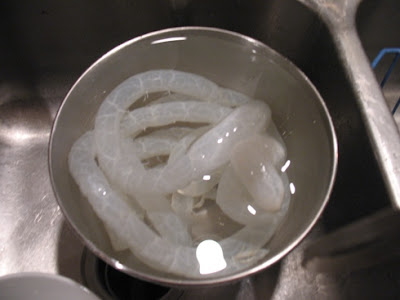 After stuffing six of the smaller diameter salami, I put the leftover beef middle back on and mad one more larger salami with the rest of the meat. Here's what I ended up with: 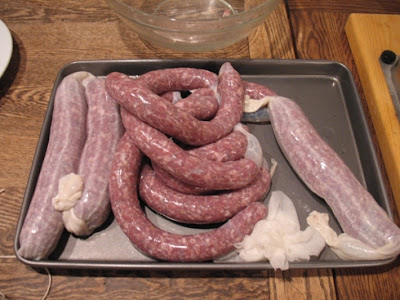 Now it was time to tie them up and weigh them. It took a little while. The first delay was finding the butcher's twine. I keep it on my spice shelf. It wasn't there. I looked all over the kitchen. It wasn't there. I asked my wife if she had seen it. "The girls have it, I thought you gave it to them." Not sure how or when they took it, but it was over by a craft table and I think they had been making necklaces with it. Once I had the string, the pace picked up a little bit. Not much though. About an hour later every thing was weighed, labeled and tied up. Once again, I give you salami in bondage: 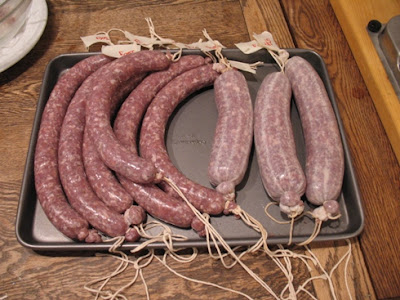 These went into the chamber which got sent up slightly different than last time. Still the same piece of plastic hanging from the floor joists, but this time the humidifier isn't on the floor. Instead, it is on top of the winner cooler I bought off of Craigslist to cure salami in (it didn't work - wine fridges don't work like regular fridges and if you close the door you will have 100% humidity, no air circulation and you will be growing fuzzy, nasty looking mold). 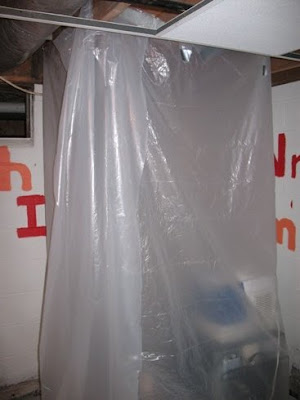 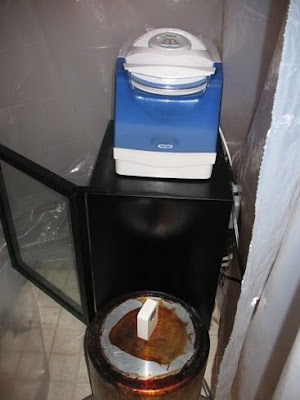 I hung the salami fairly low. The idea was to have the humidity fall to the level of the salami and not be in the line of the humidifier fan. 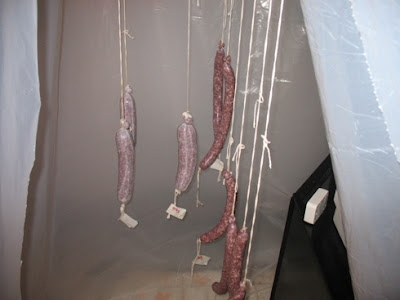 The last thing I did was about 12 hours after the salami had been hanging. I bough another culture. This one is supposed to bloom a beneficial mold on the outside on the salami and prevent the case from drying out before the middle of the salami. I bloomed three grams of the culture in a little over a cup of water. Then I pour the cultured water into a lasagna pan and rolled the larger salami and 3 of the smaller salami in the water. Then I hung it up again. No signs of this culture bath doing anything yet.

The humidistat on the humidifier consistently reads 70%. The humidity readings I get on the indoor/outdoor gizmo (the little white box next to the salami in the picture above) are consistently 60%. My guess is that the truth is somewhere in between. The temperature in there seems to fluctuate between the high 50s and low 60s (Fahrenheit). The salami will hang until they have lost about 30-40 percent of their original weight. Hopefully, some will be ready for Thanksgiving.
Posted by Jon in Albany at 11:14 AM