Time to make the bacon

Saturday didn't go quite as I planned. I was going to wake up, have breakfast and play with the kids while the cured pork loin danced with heat and smoke. It didn't quite work out like that. There are 2 new calfs at my in-laws. They have been there about a week. I think they are used to a larger herd and there being only 4 cows, including the 2 of them, is freaking them out. At dusk Friday night, one calf wandered away from the other 3 cows, then couldn't find them and then lost it in a panic attack. It ran around not knowing where it was going. It broke 3 fence posts and a gate. So instead of makin' bacon (I love saying that) this morning, we went up for repairs. It was a good day. Got a lot done. Everything is fixed. Father-in-law is back to being as calm as he gets.

Sunday is looking pretty full too. The kids have a 9:30 appointment at a flu shot clinic. We've tried to cut a deal. Brave kids for flu shots in the morning, Hoffman's Playland and ice cream in the afternoon. We'll see how it goes. Then later Sunday, I have to pack and drive to Syracuse for a minimum of 2 days for work.

But the bacon is ready NOW...We got home a little after 8 this evening. Got kids to bed and it was pushing 9. So I did what any insane food whack-job would do. I went outside a lit a chimney of coals. I decided to try and do this in a kettle grill. That's the moon over my neighbor's house. 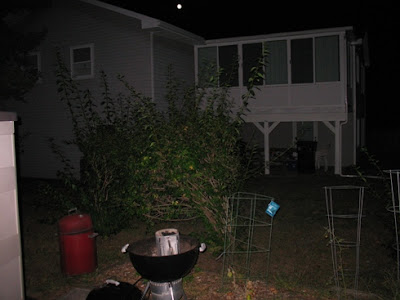 And here's the pork loin after sitting in the fridge, drying for about 20 hours. It smells good. This step helps a lot. I believe it forms a "pellicle" which helps somehow with the smoking. I've made slab bacon omitting this step and well, don't skip this step. The end result isn't as good. And again, no idea why the photo is rotated. 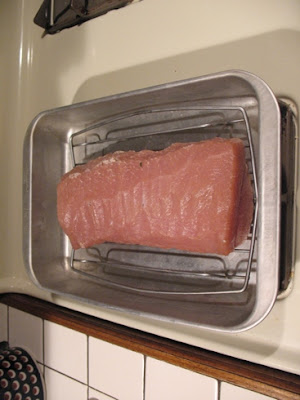 I put all the coals on one side and the loin on the other. I also slotted a piece of heavy duty foil and slipped it through the grate. Not sure if it worked, bu the idea was to reduce the amount of radiant heat hitting the loin. I added a few handfuls of apple chips to the coals and slapped the lit on. 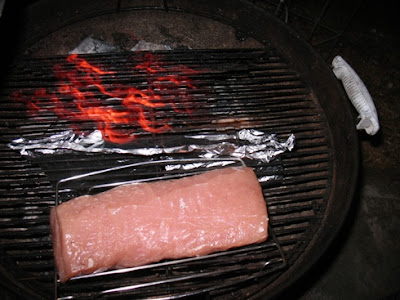 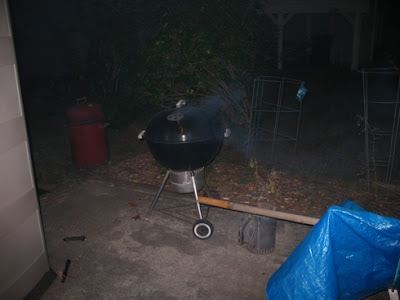 After an hour on the grill, I flipped the loin and added another handful of apple wood chips. After 2 hours, the moon was higher in the sky and the loin temperature was hovering around 140 degrees. I took it off to cool after about 2 and a half hours on the grill. I'll put it in the fridge overnight and find sometime to slice and freeze it tomorrow. Cooking a meal with it will probably have to wait a week. But who am I kidding, I'll have a taste tomorrow. Did I mention it smells good? 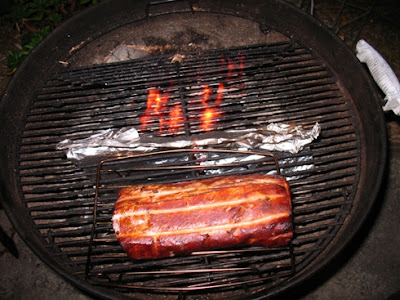 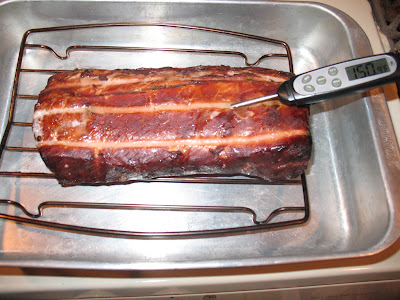