Haven't had much to post lately. Went to a conference. Decent presentations and there was a fun hospitality room at night. Free Scotch. I'm surprised I left.

Still obsessing about the oven. Still leaning towards doing it, but the saner side of my brain is telling me to do more research. I think it has a point. There are a lot of decisions to make and things to learn before breaking ground. One perk of being at a conference and skipping the lunch was that I got to drive around a price things. In a comparison between Home Depot and Lowes, the Depot had better prices. Most of the cost differences were withing 30 cents. In defense of Lowes, they had a few things the Depot did not and their block was on sale this week. I also went to Harbor Freight to look at tile saws. Ouch. I'm also looking for a nicer used saw. But while I was at Harbor Freight, I picked up a cheap clamp that I might use in the Indispensable Tool. Here's a photo of one variation on the Indespensible Tool. There are many variations. It is basically a rod attached to a hing that is attached to something that can rotate. The clamp attachment can hold a brick in place. As the dome rises, the radius will stay the same. As you get really high, you can take the clamp off and attach a piece of wood for a form. You can also attach a Sharpie for scribing lines. I have no experience with one, but it apparently lives up to its name. I want one. 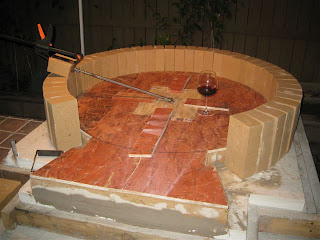 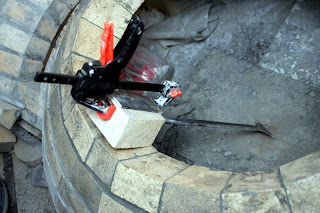 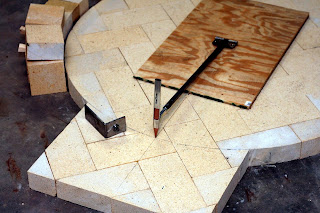 At the Forno Bravo site, I usually read a full thread on someone's oven construction every night. It is very educational. There is a guy named Dino in California that built a beautiful oven. Really impressive. But the oven's need a break. Clear the head. And what better way to do that than cure something. There is a new butcher shop in Waterford called Henry's Meats. I'm always looking for new places to try for a pork supplier. So far, I have found Cardona's to have the best pork butt to be turned into sausage and salami. Wasn't as impressed with their beef or chicken. Anyhow, something need to get made. Enough sitting at the computer and daydreaming about pizza. Gotta to cook something. And finish painting the deck too. What a pain in the ass that is.
Posted by Jon in Albany at 11:15 PM