Winter Pizza Challenge and a confession

The winter pizza challenge was to revisit one of your Signature pizzas. I had made what I call the Fancy Pants Mushroom pizza back in November of 2019. The pizza has a base of creme fraiche (fancy pants sour cream), mushrooms sauteed in olive oil with garlic and a splash of wine. Usually some oregano in there. I've been prepping some topping in the oven during the preheat (a sheet pan of bacon cooks surprisingly quickly and well in there) and I had seen something on roasting mushrooms figured I'd give it a try.

Monday was President's Day so a day off from work. Temps were also in the 40s.  I lit the oven a little after 10. Fun fact - starting a fire in a wood oven with a weed burner is oddly satisfying. It's weird, a stick light feel soulless compared to a match, but the weed burner is fun. Don't need any newspaper.

Anyhow, for this go around of the Fancy Pants Mushroom, I roasted the mushrooms in the oven and added the seasoning and other ingredients later. 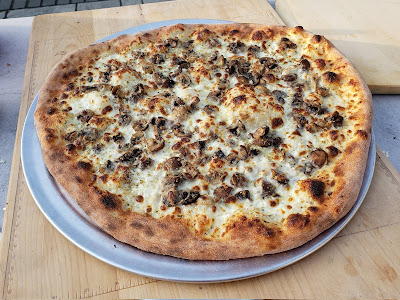 The dough was a little under fermented and I didn't like the cheese,

The line at Restaurant Depot was insane and I was only getting cheese so I stopped at Shop Rite for some other toppings and grabbed their house mozzarella. Good news, the cheese was on sale. Bad news, it grated funny, was bland, melted a weird shade of white and will not be purchased again. But I did also pick up some Seabrook Farms creamed spinach. I kind of wonder how that would do on a pizza.

the mushroom were ok, but there is more flavor to them when sauteed. The garlic gets a little softer too. Next time, I think I will try adding the garlic and a splash of wine to the sheet plan when the mushrooms come out of the oven. There should be enough heat left to incorporate them. I supposed I could just slide the pan I use in the oven too. In the end, I'm pretty sure I was the only one nit-picking the dough, cheese, and flavor of the mushrooms. Something, something, own worst critic...

I also tried a new go at the gluten free pizza. I used a blend of gluten free flours, water, yeast, salt and some olive oil. The mixture all combined kind of comes out like spackle. I think an offset spatula would help spread it in a Detroit style pan. So after about 24 hours in the fridge, the dough was spread in the pan, then there was a 4 hour room temp rise. I par baked the dough with just a little bit of cheese around the edges so stop the dough from shrinking. Cooled that off and then topped it just before a final bake. Went half cheese, half mushroom. It came out pretty good. I think this is the gluten free pizza path of the future. I've got 2, dedicated gluten free pans for this. 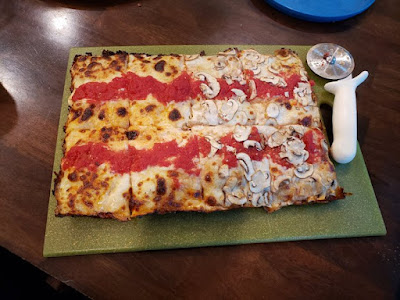 All in all, that was a good day. So the confession: I've never put pineapple on a pizza. I can't think of a time when I have liked cooked pineapple. Anyhow, when we were meeting the new neighbors, it turns out one of their little kids likes pineapple on pizza. I thought I'd try to make the best pineapple pizza she ever had. The plan was:

1. Take some fresh pineapple (I will not put canned pineapple on a pizza)

2. Glaze/caramelize it with a little brown sugar

3. Make a Hawaiian pizza (even though that topping combination was created in Canada by a Greek immigrant with no ties to Hawaii) with the pineapple and some good, real ham

4. Walk it across the street

5. Sip an adult beverage and think about what I had done

But none of this happened.The neighbors were out of town during the school break and we had the pineapple with dinner on Tuesday night. My pineapple-less streak received a stay. Not sure how long the stay will be. My wife noted that all it took to get me thinking about pineapple on pizza was a little kid making the request. A few adults have brought it up in the past and I kind of pushed it off.

What can I say? I've got a soft spot for little kids that like my pizza. It's not like I'm going to eat pineapple on pizza myself.

Unless it looks and smells really good.

Then maybe. I doubt it. Probably not. But maybe.