Might have some new people poking in from Chuck Miller's blog. I had a nice conversation with him not too long ago and I think that goes online this weekend.

First things first: I was a little nervous during the our talk - looking at a recording camera and speaking is not one of my strengths - so I'm going to mention a few things that I got wrong. Try to set the record straight.

The biggest and dumbest mistake was saying this blog started in 1998. It was 2008. What's a decade, really? I was going off a vague memory of looking at things online back in an apartment before I was married, but that memory is of a barbecue ListServ-forum-ish thing from back in the day. So this space was inspired by Michael Ruhlman's blog and the names I couldn't remember: Chef Bob Del Grosso and Chef Mike Pardus who had a blog called The Hunger Artist. Before them, I didn't know what a blog was.

The slightly less big and dumb mistake was not clarifying that I am not really a pizza expert. Enthusiast is a better word. That's not to say I don't know a good amount about pizza, but many know more than me. So they would be experts and I'm an enthusiast. Pizza nerd works too.

The last thing that comes to mind is another name I couldn't come up with on the spot. We were talking about local entrepreneurs and the name I couldn't come up with was Cory Nelson. He's the founder of Troy Kitchen and then Cloud Food Hall in Albany. I would bet that whatever project he decides to do next, it will be creative and worth checking out.

Hopefully I caught all my glaring mistakes. On to a blog post....

If you are stopping by from Chuck's blog looking for pizza making tips, I would encourage you to join the pizza forum - www.pizzamaking.com. It is free, but you do have to send in an introductory post that might take a bit for a moderator to approve (weeds out robots and spammers, plus it is nice to say hello). After that, you have free reign on the forum.

Pizzas are divided into styles, recipes and techniques abound, plus it is a very friendly community. I've had the opportunity to meet a few forum members in person and they did not disappoint. There's some talk of a New Haven pizza crawl sometime this summer. Going to try to make it if I can. Screen names become familiar and the people behind become "friends." You cheer for their pizza successes, worry about them when they are ill, and miss them when they aren't around.

There used to be a thing on the screen that let you know how many hours you had been logged onto the forum. It's still there, but you have to dig for it now. Anyhow, I remember posting about the first pizzas I made after joining the forum and the clock showed a little more than 10 hours of poking around the forum. This was back in February of 2013 baked using a homemade pizza steel at my former house where the oven went to 550. 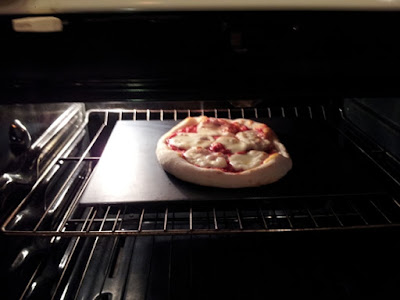 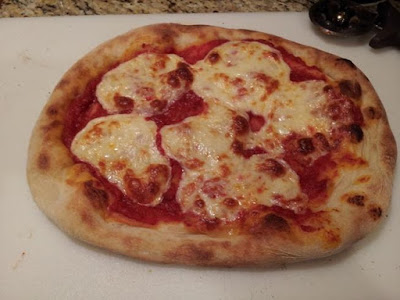 The stats say I have spent 72 days, 2 hours and 13 minutes looking at the forum as I type. Here's a fairly recent pizza out of the wood oven. 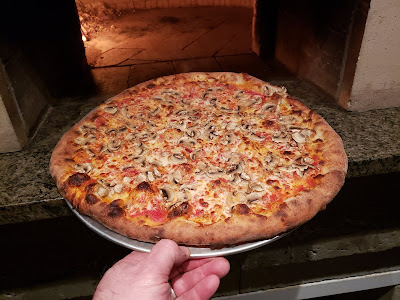 So if you want to get into pizza making, join the forum and poke around. Also a kitchen scale really helps too and you don't need a mixer. Many say hands are better for small batches anyhow. There's even a "fork mixer" that tries to mimic hands working dough.

Thanks, Chuck. It was fun talking to you.