I've been watching and enjoying the documentary Untitled Pizza Movie.

I first heard about it on the pizza form, because, really everything I hear about is on the pizza forum. I don't get out much (but no one does these days). The movie isn't just about pizza, it is more about life, people, addiction and redemption with a running pizza connection between everything.

One of the threads in the movie follows Andrew Bellucci for about 25 years. I've never spoken directly to Andrew but we have had a few interactions on the pizza forum. Not sure they are enough that he would remember my name, but maybe. The guy is clearly passionate about pizza. It has been such a big part of his. From a start at Two Boots, moving on to Three of Cups and wood fired and then the reopening of Lombardi's with a coal oven. There's a little hiccup in the story line when some earlier fraud/theft caught up to Andrew. All of this happened before I had ever heard of him.

When I first new of Andrew he was on the pizza forum talking pizza. He then went to Kuala Lumpur to open NY style pizza places and introducing the area to a slice. He built a very cool looking multi fuel oven at his place. It was neat to see the oven in the movie after seeing it on the forum. From there, Andrew worked at the Joe's near Times Square (if you want the recipe, it is on the forum) and then went to Michigan to open the Ann Arbor location.

There are ups, there are down and there is the currently ongoing shot at redemption. Back in December, Andrew opened Bellucci's in Astoria. Looks like business is booming. They've run out of dough at least once. And by run out of dough, it isn't that there wasn't dough in the shop. There wasn't enough properly fermented dough and he'd rather close then sell something less than ideal.

The photos of his pizzas look great. One of the topping combinations is a Vodka-Roni. It starts with just cheese and pepperoni on the dough. When the pizza is done, splashes of warm vodka sauce are blotched on Jackson Pollock style. The last time I made pizza, I gave it a shot with my own, quick n easy vodka sauce that doesn't actually have vodka. 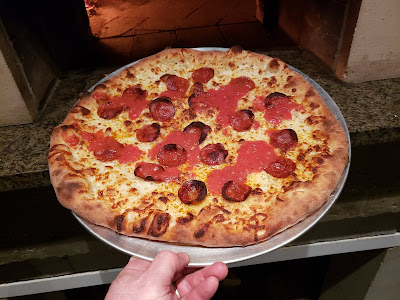 I think I've got to get the sauce a little thinner. Even so, this was delicious and I definitely want to try the original. I predict you will see this is more and more places just like Hot Honey went everywhere a few years ago.

Andrew's isn't the only story in the movie. There are also two childhood friends who grew up in the city. In the beginning, they look like they could be out of an old Billy Joel song. Like they might not have been friends with Brenda and Eddie - the popular steadys and the king and queen at the prom, but they knew who they were. It follows their lives as they go from inseparable to distant. One of my favorite moments so far is Leeds talking about a greasy, orange slice in the first episode. "The old orange slice. You remember that slice? It was orange, it was greasy, it was super thin. They handed it to you with both hands. It's a dying thing. I never seem to find that slice. Maybe technically it's not the greatest slice you ever had in your life you know, etcetera, etcetera, but it was an old friend. It was the slice of my childhood." This is basically the pizza cognition theory a full decade before the pizza cognition theory.

For about another week, the Untitled Pizza Movie will be up at Metrograph. It's a $5 monthly membership for access. I haven't watched the extras yet, but most episodes have interviews immediately after the screening. The last episode comes out tonight. The rumor is that the sreies is getting picked up by another distributor (3 letters, starts with H and ends with O is the rumor).

Anyhow, if you get a chance, give Untitled Pizza Movie a shot. I've been enjoying it.