Made a batch of pizza dough. Weather looks like it will cooperate on Sunday so I am jumping at the opportunity to play with the oven. While I was dividing the dough, I started thinking about the first job I got after moving to the area at Bountiful Bread in Stuyvesant Plaza. It was smaller and on the other side of the plaza. I think a Cold Stone Creamery is there now. It wasn't open yet.

The interview I went to was with a baker named Sue who was running the place. I met her at the Mangia that used to be in Stuyvesant Plaza. Same group owned both places and a few others.We sat in a booth. Her on one side with lots of folders and binders and papers and me on the other with no real food service experience to offer. I had bused tables for a few months once. Anyhow, the first question she asked was, "Are you drunk?" A little confused I told her I wasn't. Apparently the last interviewee was drunk.

Sue went on to tell me about her vision for the bakery, the coffee and baked goods (Sue made some seriously kick ass flourless chocolate brownies), the fococcia, the breads, one was going to be a sourdough made with a really old starter from La Brea...

"The bakery in California?" I asked.

You've heard of it? You're hired.

Sue was great. We talked food. We talked cookbooks. She tried to teach me some baking and kitchen skills. She could knead and ball two doughs at the same time, one ball in each hand. And it was disturbing how much better each of those balls looked compared to the one I would use two hand and twice the time to shape.

For the life of me, I can not remember Sue's last name. I'd be curious to google her name and see what she is up to these days. Like an idiot, I just went to go see if there was anything on Bountiful Bread opening in the Table Hopping Blog. Pretty sure that started some 10 years later. I'm sure she is doing something good. I also wonder what Sue would think of my pizza making. I managed to get these dough balls divided, shaped, bagged and stored in under 15 minutes. 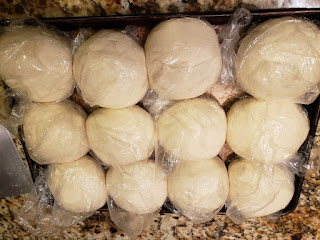 Probably would have taken Sue 5. She could probably also get the picture to not be upside down.