I was on the road this week, so , yeah, pizza. In case anyone thought this tweet was a joke...it wasn't.

I have been following an anonymous pizza writer called SexySlices. SexySlices has been on a mission to eat a lot of Buffalo Style pizza. It’s got nothing to do with wings. It is a large, doughy pizza covered with tomato sauce (possibly sweet), a shit-ton of cheese and usually some cup and char pepperoni. This is the type of pepperoni that cups as it cooks and the rim gets a little dark. You can get it with a stick of Margherita pepperoni if you slice it about nickel thickness. Some time ago, Serious Eats did a nice write up on why some pepperoni cups and others don’t. There are fans of both cupping pepperoni and pepperoni that lays flat but the cupping style seems to be having its 15 minutes of fame as it has also become popular down in the city.

As much as I really want to love Buffalo Style pizza,  I don’t. I kind of wish I did. This style of pizza is about excess and I prefer a more balanced approach. Everything about Buffalo Style is big. However I think it is the perfect slice for the drunken Bills Mafia fan just after he tries to jump through a flaming table a tailgate party. I’m not that creative, it's a thing.

A week or two ago, SexySlices had a big pizza event with pizzas supplied by 8 of his favorites. The people voted and Macy’s Pizza won. I figured if I was going to give Buffalo style another shot, it might as well be from the winner.

We got to Macy’s and they had a large 1 topping Tuesday Special. There you go, a large pepperoni pie was the order.  The Sexy Slices Trophy was on display. 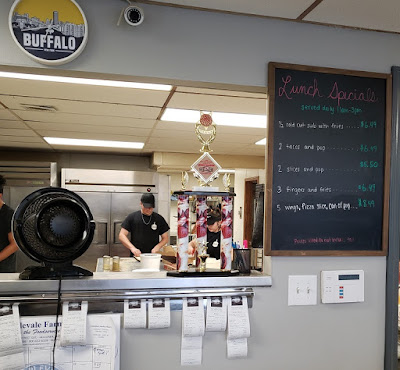 A guy came in just after us and ordered a large double pepperoni pie. I think there was a little confusion because I’m pretty sure we got the double pepperoni pie and this guy ended up thinking Macy’s double pepperoni is weak. My first thought when handed the box was, “Holy shit this is heavy!” I would have liked to get an official weight on the pie. I’m guessing around 4 pounds. Here’s the pie. 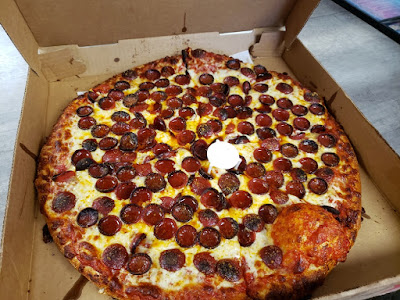 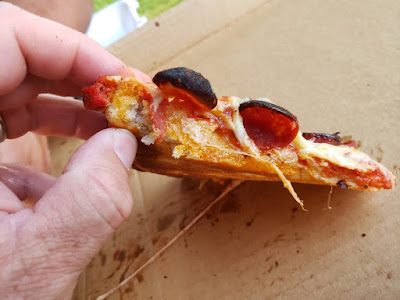 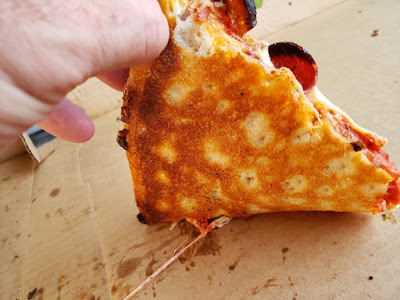 It’s heavy, sit in your gut pizza. It’s greasy, messy to eat and the sauce was definitely sweet. 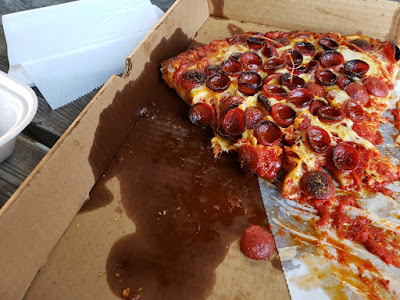 I’m sorry to say that if this is the best example of Buffalo Style, I’m out. On the plus side, it was a little better cold. Still not good but better. The pizza certainly wasn’t offensive and didn’t make me angry for a few days (it has happened) so this was kind of an early dinner with a friend on Tuesday night and then I ate the leftovers late at night probably more because it was there and I eat like an idiot on the road than I actually wanted the pizza.

In the morning I got right to work (certainly no need for breakfast) and then had about an hour to kill before a meeting. During the summer, Paula’s has a doughnut filled with cannoli cream. It would have been foolish not to try it, right? So I tried it. 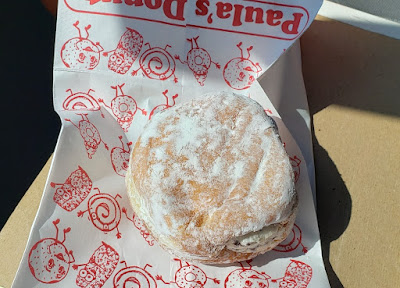 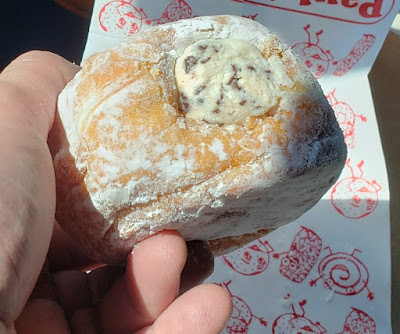 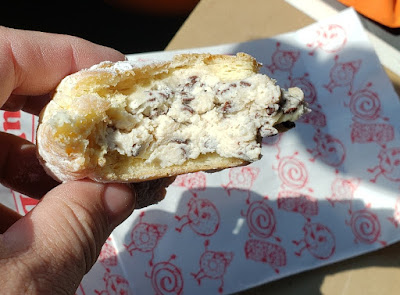 To put it in local perspective, think powdered jelly doughnut from Bella Napoli but lose the jelly and add so-so cannoli filling. It was novelty and an experience, but Paula’s offers better doughnuts. When dinner rolled around, there was really only one place I wanted to go. Jay’s Artisan. I first met Jay on pizzamaking.com and then met him on his food truck during a Buffalo visit (made my first wood fired pizza on that truck). Jay has a restaurant now and if you like pizza - especially Neapolitan pizza – and are in the area you should definitely stop by and check the place out.


First up, a Margherita. 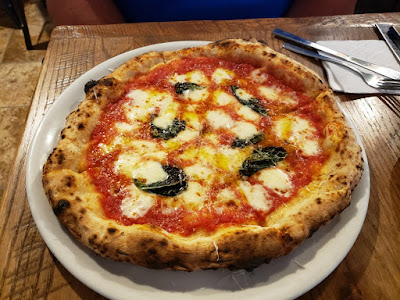 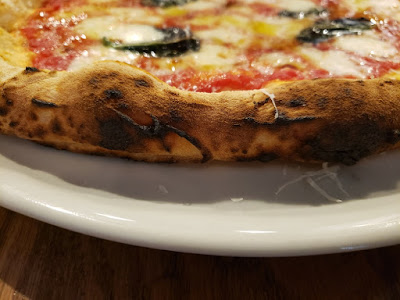 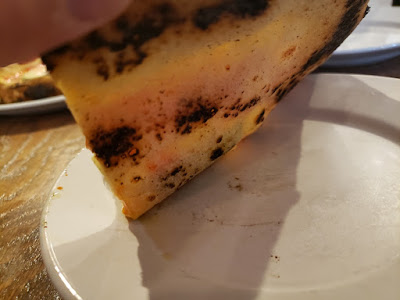 There is no place to hide flaws in a Margherita pizza. It is just dough, tomato, basil and cheese with a drizzle of olive oil. Jay adds a littl salt and a little parm. It is delicious here. I’d argue lighter and more delicate than the Margherita at Song e Napule and that is probably a bake time thing. Jay is cooking 60 second pizzas and Song e Napule were more in the 2 minute range. Don’t get me wrong, both are really good.

Jay has also been making a Detroit-ish style pizza. For a while it was just Wednesday and Saturday (this Wednesday night visit was not an accident) but now you can get those every day. Only 40 of them though. We (same poor soul that ate the Macy’s pie with me the night before) went for Red Top which was a pepperoni pizza – garlic, cheese blend, cup n char pepperoni, Sicilian oregano, organic tomato sauce and parm. 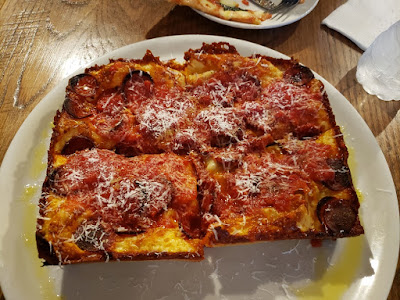 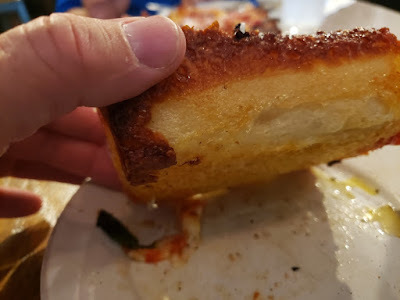 A good Detroit style pizza is everything that Little Caesar’s wants to be but isn’t. These were definitely different than the Detroit style pies I had and Emmy Squared and Norma’s. Both of their crust had more of a fermented flavor. This was light and airy with what seemed like less oil. It was really good. Since we were there…we got a ‘nduja pie too. 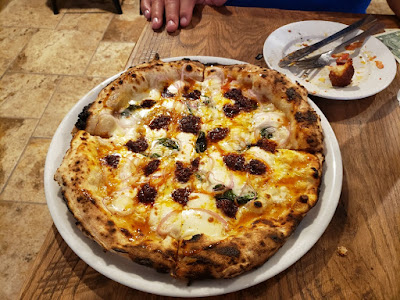 Garlic, basil, freash mozzarella, fontal, red onion Berkshire ‘nduja, chili honey and parm.  Also really good. Little spice, little sweet, delicious crust. Had a great time talking dough, the pizza forum, pizza places with Jay. Also got to meet FlourCityMark who was there grabbing a Margherita. Pizza people are the greatest. Just before we headed out, Jay told us he had put in a Banana Pepper + Onion square pie for us (garlic, cheese blend, red onion, banana peppers with poblano cream sauce and parm post bake. This one had to be cut into 6 pieces instead of the usual 4 because I was just about done. 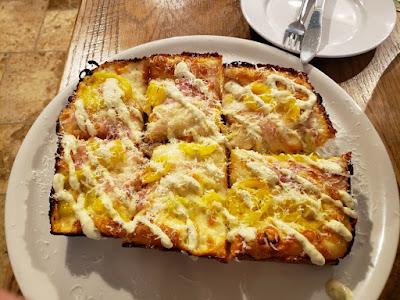 Another good pie. If I had to pick the best, I’d go with the Margherita. When I venture into Neapolitan style, someday fairly soon it will happen, I hope I can eventually make one as good as this.

Well, Thursday came and it was time to head back. Leftover cold banana pepper pizza for breakfast. Ate a little chocolate during the ride back from Buffalo. And now that I have returned to Albany, it is time to go back to non idiot style eating. I promise nothing, especially since I am making some dough myself tomorrow morning.
Posted by Jon in Albany at 11:15 PM