Once again, I returned to Batavia and I wanted to use the opportunity to finish my quest to eat all the non-chain pizza Batavia has to offer. Technically I'm just coming close but I’m still going to call it. The signage in front of Mark Pizzeria has changed. It looks like it is now called 151 Pizza. From a quick drive by, nothing inside the store looks like it has changed so I think I’m close enough to saying I tried everywhere. I’ll be back in the area at least once more so maybe I’ll try it, but if they are still cooking on a conveyor belt, I’ll probably skip it.

The last place to visit was Big Pauly’s Pizza. First thing I noticed was big deck ovens which is a step in the right direction from the conveyor belts in my opinion. Remember those air pop popcorn makers that basically blow dry popcorn? It’s not the way to make great popcorn and I’d argue it isn’t the way to make a great pizza. I ordered a medium (listed as an 8 cut) half cup and char pepperoni and then watched my order get made. I must be getting old because the guy making the pizza looked really young. He and the other woman behind the counter were very welcoming. If you are going to leave your shop in the hands of two young people on a Wednesday night, they would be a good choice. Not the cleanest kitchen, looks like it has fallen victim to a lot of fryers running all the time but the place smelled good. 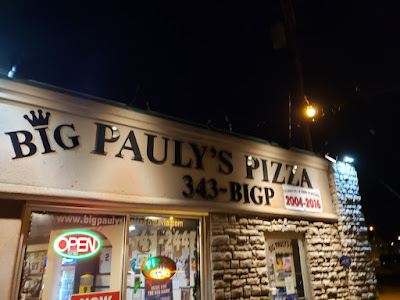 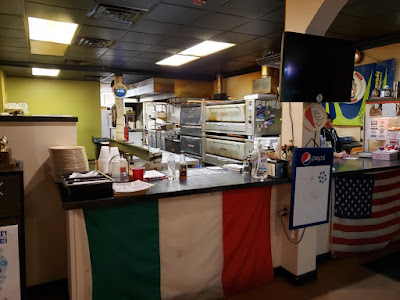 Onto the pizza. The dough ball was stored in a plastic bag. Nothing wrong with that (I do it too) I just don’t see it in many professional shops. There was no edge stretching. The dough was first pressed down on a floured stainless steel counter. It was a press and then pull hands apart technique. There was a lot of bench flour and just a final little bit of knuckle stretching before the skin went on the peel. The rim of the pizza was then kind of pressed/formed. Once the dough was on the peel a lot of sauce went on and was spread to the edges. Then there was a light dusting of grated cheese and followed by a pinch of dried herbs. Cheese and then half the pepperoni went on the sauced skin and into the oven it went.

Being a nerd, I started a timer. About 8 minutes in, the pizza got checked, a bubble got popped, a little bit of a spin and then the oven door was closed again. Total bake time was 11 minutes, 20 seconds. With that kind of time I'd guess the oven temperature was below 500F.  The pizza cost $11.89. At least I think that’s what it cost. It was just under $12, I forgot to note the final price. 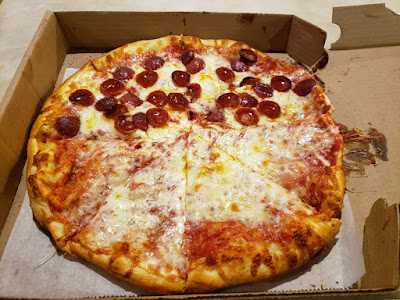 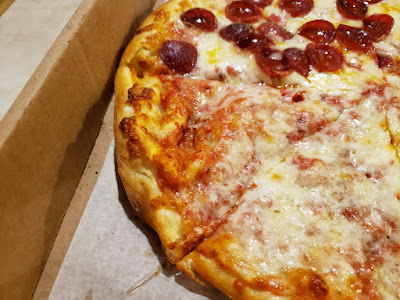 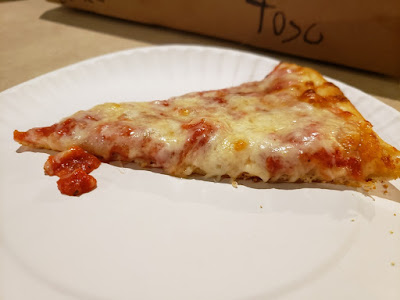 Crumb, I think a combination of the pressing and low oven temperature limited the oven spring. 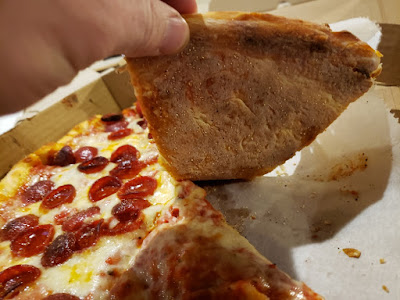 Undercarriage. Not very dark for an over 11 minute bake. That oven couldn't be very hot.

The verdict: I thought the crust was pretty flavorless, the crumb was very tight from all the pressing.  An edge stretch would really have helped the rim. There was too much sauce and cheese so the toppings slid. I’d guess the diameter of the pizza was 14 inches and I think the dough ball was a little too big for that size. Western, NY seems to like a doughy crust so this might be more of a regional preference. Sauce had a sweetness too which is also a Western, NY thing. The pepperoni had a little zip to it. In the end, better than a chain pizza but not anything special. Very friendly, welcoming place though.

So now onto my official Batavia, NY Pizza Power Rankings

Best
1. Batavia’s Original – my personal preference would be to get the less doughy NY Style instead of the thicker Batavia Style.

2. Ken’s Charcoal Pit – pizza cooked in an outdoor oven that is only available on Thursdays, Fridays and Saturdays.

Better than a chain, but kind of similar to a chain
3. Big Pauly’s - I think the deck oven and cup and char pepperoni push this shop to the top of this portion of the list.

4. Jerry Arena’s - Kind of like a homemade chain pizza.

5. Mark’s Pizza (no longer there) – Smaller than a national chain, but a pretty similar style of pizza.

Order something other than pizza
6. Main Street House of Pizza - while I didn't enjoy the pizza here, it looked like other dishes might be good. Pretty big menu.

7. Ficarella's -Try the wings, maybe? If I think too long about it, I still get mad at the pizza I had here.