Well, when I wrote last, I had some compacted stone surrounded by sand. Today, there is a pretty damn level 6 foot square concrete pad. 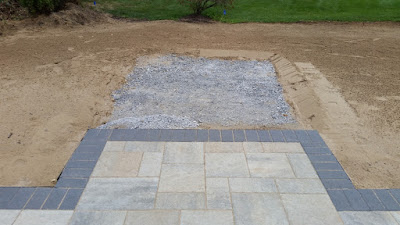 When the guys building the pool had a trench open to run gas and electric, they also put in a conduit line to bring electric to the oven. I started by digging a trench from where that line ended to where the oven was going to be built. 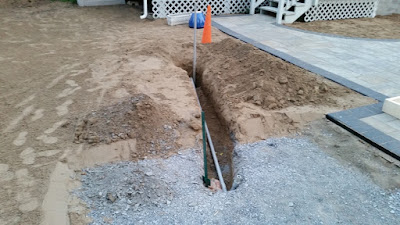 The conduit got glued up, and I back filled the trench. I had made a box out of 2x6s, picked up steel rebar. The box had to be set and leveled, which was actually a little harder than I thought. I made some stakes to keep the box moving and tightened everything up with some deck screws that I already had. I decided to stop chasing the square-ness of the box. I was pretty close. Definitely less than a quarter inch, probably closer to an eighth. And it doesn’t really matter because it’s just a base. Level, would be nice too, but not absolutely critical. 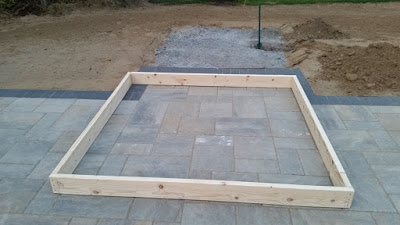 Once the box was squar-ish and level-ish, I put down some poly that was left over from the pool construction and laid out the rebar. The goal was to cheat a little toward the edges of the slab since it will be the most loaded area. The rest were spaced at about a foot. After they bars were laid out, I used some steel wire to tie most of the intersections together then lifted the rebar mat up to a handful plastic stands to keep the bars higher in the slab. Not too shabby. And surprisingly level. 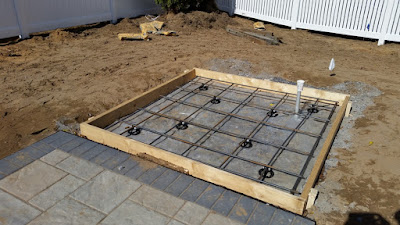 When I posted a similar picture of the form on Twitter, I got this from Gary Dake (President of Stewart's Shops).

Still can't believe he saw the picture and then took the time to comment. Gary, if you're reading this, PLEASE, PLEASE, PLEASE bring back Butterscotch Blonde ice cream.


By my calculations I needed a little less than ¾ of a yard of concrete. I’m not sure why, but concrete is ordered in cubic yards and no one ever includes the cubic part. Yards. It’s kind of like a square of roof, but volume. This works out to a ballpark 30 bags of Quickcrete, 80 pounds each. I lined up a mixer and was preparing to make half a dozen runs to Home Depot or Lowes to get 30, 80 pound bags of concrete mix to my house. This did not sound fun. It actually sounds kind of crappy. By the time I actually put each 80 pound bag in the mixer, I’m guessing I would have had lift and move each bag 4 times - onto a cart, into the car, out of the car, over to the mixer.  I have a dolly that might have helped. I gave one of the larger concrete plants a call. One yard delivered would have been a little over $400. Ouch. I get it. While they were delivering a tiny amount of concrete to me, they could have been selling 10 times the amount to someone else so there is a premium on small batches for one time customers.

While I mentally prepared to throw out my back moving bags of concrete, I heard about another place. Clifton Park Concrete. I think I’m kind of blabbing out a well kept contractor’s secret here. Clifton Park Concrete is a small operation. One guy. One truck with a 2 yard capacity. Compared to the bigger trucks, it looks kind of cute. And the owner/operator could not be a nicer guy. 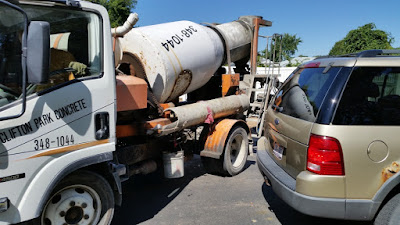 I called and set up a time. He called about an hour before the delivery to confirm. I had originally planned to do all this myself. Another one of those self imposed tests – if I can do this on my own, maybe I can build an oven. The guys at work convinced this was a bad idea in case something went wrong – flat tire on the wheelbarrow, screeding (leveling the top) is much easier with two people and more hands makes lighter work. So Ryan offered to come over with a back up wheelbarrow and some other concrete tools.
The concrete truck came about 10 minutes early. Ryan wasn't there yet and I started moving concrete without him in my brand new trusty wheelbarrow. This was its first workout. I had about half of the form filled and I was raking concrete to fill the corners, when the truck driver asked if I wanted help screeding. So we ran a 2x4 back and forth across the form leveling the concrete. I think I got another wheelbarrow of concrete into the form when Ryan appeared. He took over moving the concrete while I raked concrete into the corners of the form. We leveled up the rest of the pour and I went to get a little more concrete in the wheelbarrow for “just in case.”

Turns out Ryan is much better with a trowel than I am. After he left, I covered the concrete with plastic to try and slow down the water evaporation. Latter in the afternoon when the kids got home, I made them feel the warm concrete. The heat of hydration is part of the chemical reaction of concrete curing. They were as impressed and as young girls get touching a warm sidewalk get. So, unimpressed. 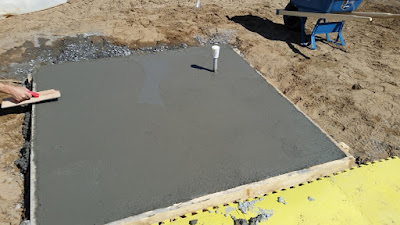 A few days later I broke off the forms. Ta-Dah! A slab of concrete waiting for an oven. 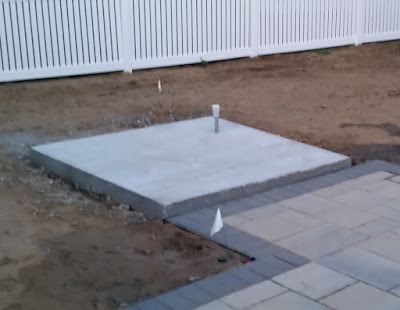 To celebrate, I made pizza Saturday night. Here's a Utica Greens (with homemade pancetta) pizza. It's a little bit of extra work to make this pie, but I really like it once in awhile. 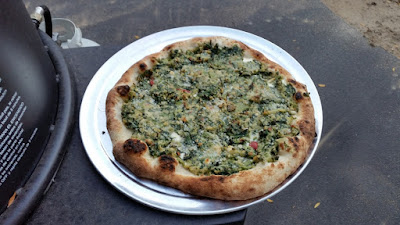 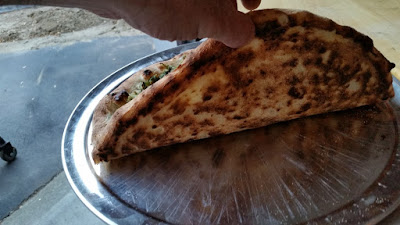 If you have a small concrete pour – the minimum order is a yard – I can’t recommend Clifton Park Concrete highly enough. For just under $250 (tax included), he delivered a yard of concrete and drove off with the extra. Yes, it could be more expensive than the Quickcrete. Figure 30 bags of Quikcrete is about $130. But if you add $75 for delivery or have to rent a mixer, the price is actually pretty good. And it is significantly faster and a lot less labor. We were done, everything cleaned up and the slab covered, in under two hours. I doubt that would have happened mixing 30 bags one or two at a time. So for all your kind of big but not huge home concrete projects, call Clifton Park Concrete. I plan to call again in the spring for the upper slab of the stand.