What I think about late at night

The pool is mostly finished. Not quite, but mostly. Work is supposed to start up again soon. Once the pool is done, the patio gets installed. Part of patio plan includes putting in a sub base for the oven oven I've been saving up for, thinking about, talking about and daydreaming about for years. I think the first I wrote about it on the blog was in May of 2010. Well, that's the first time I tagged it anyway.

As I approach the reality of an outdoor oven of my own, my brain has been in overload. In the beginning, there was Phase 1: build it from scratch. Get a wet saw, a pallet of firebrick and start building. The reality of the time needed to build an oven set in and I moved into Phase 2: build a base, install a kit oven, build a quick house around it for weather proofing and get to cooking pizza faster. Then I started pricing out the cost of the gable house around the oven. That cost can be all over the place depending on how you want the house to look. Hell, just the stone veneers at Home Depot range from $4 to are you kidding? For not much more than the cost of the kit and the gable house, I could move into Phase 3: Instant gratification: a delivered, ready to go oven on a cart. Just wheel it into place, and start a fire.

Unfortunately, I have a windmill for a mind so you can probably guess what comes after Phase 3.

We're back to Phase 1: Build from scratch. I keep thinking that this will be the one chance I get to build an oven and I'll regret it later if I don't just go for it now.

Phase 1 has me staying up late reading threads about building ovens. I was reading one last night and then realized it was 1:30. Yeah I was groggy this morning.

I've reached out to handful of people that I've never actually met to ask for their thoughts on ovens. Everyone has been incredibly nice. Here's a typical example: I messaged one guy on the pizza forum with a question about the oven at the center of Phases 2 and 3. His reply was his cell phone number for me to call so we could discuss it. We talked for about half an hour. Then to clarify a few things, about 5 minutes after we ended the call, he sent some oven photos. Pizza people are awesome.

Phase 1 is exhausting. Aside from the sleep deprivation from getting lost online looking at oven construction, there's the mental side. The planning, constantly thinking about the best way to build and the self doubt. The number of bricks I have put mortar on and placed is...well if you count the time I...no, there was no time - it's 0. I am very confident I can build the stand. Maybe too confident. Once the stand is built, that's where I get concerned. I'm starting to think I could build a dome. The entry and vent are where the oven construction loses me. Then the house...some days I think no problem. Others, I'm not sure I could make it weather tight. Especially if the chimney goes through the peak of the roof. I've seen a few solutions but I'm not sure I could build them. Maybe I'll just cover the whole thing in stucco and have it look like an igloo.

While taking a break from the forums and looking for construction grade wet saws on Craigslist, I found some masonry arch design software. I typed in the parameters of the oven du jour and it spit out the dimension and number of bricks to make the arch. I drafted them out and everything seemed to fit. Yesterday, I grabbed some lumber and a few other things at Home Depot to try and make a confidence building arch.

Using a piece of 2x3, I cut out 20 wood "bricks." The cuts on the sides of the bricks are slight angled for the curvature of the arch. 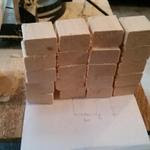 Then I cut up some shims to be the mortar in between the bricks. When I laid it out, I was off a little bit. I think I cut each brick about a blade width too wide. I can either try to shave each brick down a little, or just make the keystone in the center smaller to get the width I want. This current design was for a 42 inch oven and now that I can really see how it would be laid out, I think it might be too big. There's that indecision again. 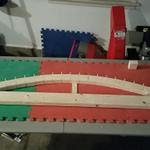 Since it wasn't exactly how I wanted it, I held off on gluing it together. But once the arch is done, I'd like to glue it together and add some tall, outer "bricks" that would make a cross section of the dome. All in all, not bad. Still not sure I can build this thing. Maybe I should call this Phase 1a: Build from scratch and when the oven falls down, get the kit.
Posted by Jon in Albany at 12:31 AM