When we first bought a house just before we got married, I picked up an old, hearty snow blower that had just had the engine rebuilt. It served me well. That first winter we went away for New Years and came home to at least 18 inches of snow in the driveway. That snow blower (which is actually older than I am) took about half an hour to clear it. Over the years, that snow blower cleared that driveway and a neighbor's driveway every time it snowed. I didn't want any money from my neighbor but he gave me a little each spring and again in the fall. The snow blower essentially became free. Once in a while the snow blower need a little work and I got surprisingly good a maintaining it.

Last winter was our first winter in this house and got a lot of snow last year. It seemed like even more when the plow was done with the street. After one particularly nasty storm, I cleared the driveway, went to the office and came home to a huge solid pile of snow that was taller than me at the end of the driveway. My trusty late 60's 5 horsepower Ariens couldn't handle that snow. It eventually got it done, but it struggled the whole time. Then something went wrong with the engine at the end of the season. Luckily there wasn't a snow storm that required a snow blower after the motor quit. I don't know enough about engines, but I was pretty sure it was something a engine person could figure out quickly. So, I gave it to my friend Joe. Joe took the snow blower home and quickly fixed her up. He fixed her up so fast that I think he felt a little bad about taking it. Something about the carburetor, a bolt and something else I didn't understand and she came right back to life.

The quest for the next snow blower had begun. I checked Craigslist all the time. I found one that looked promising in Saratoga, but it would have been a real hassle to get the snow blower to my house so I passed. Just as I was starting to regret passing on that snow blower, I found and ad in Want Ad Digest and bought this: 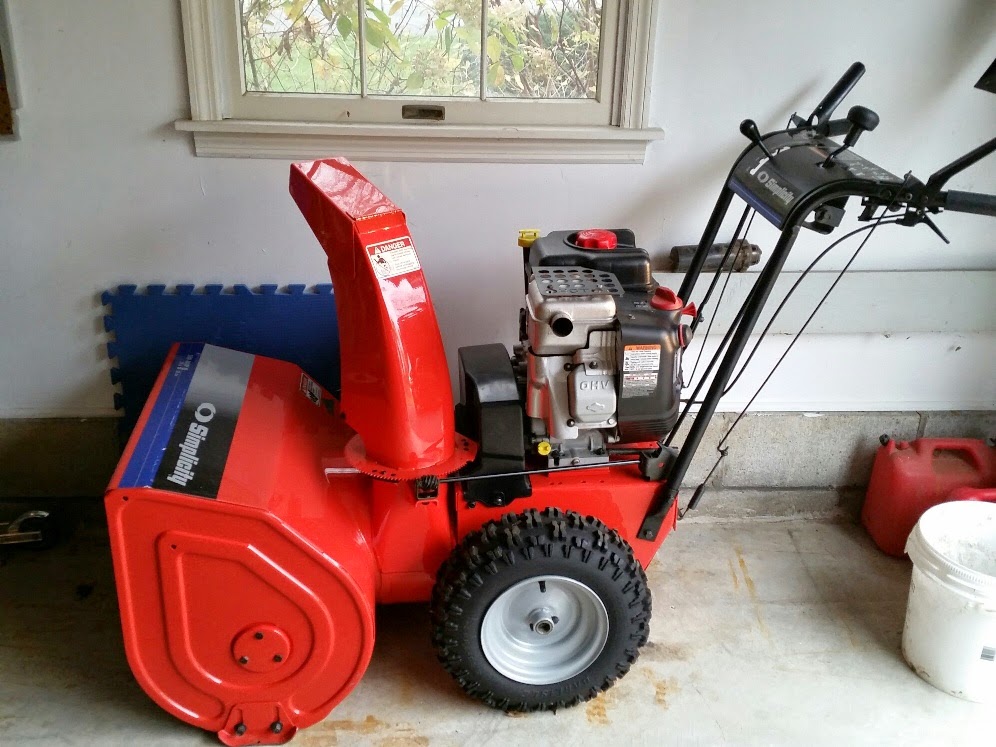 Isn't she pretty? Used, but still really shiny and not many hours on it. I've upgraded the engine from 5 to 9 horsepower. She runs great and looks like she can move a lot of snow. Plus it is the right width to fit nicely in the garage and still be able to open a car door. And it has safety features. That's something new. There was nothing safe about my old snow blower. If I fell down, that thing would have kept going down the driveway, into the neighbors yard and wouldn't have stopped until it sank in their pool. For some reason the state recently (and suspiciously close to election day) sent me two tax rebate checks. Pretty much found money. In my cheap mind, this beast didn't cost $150.