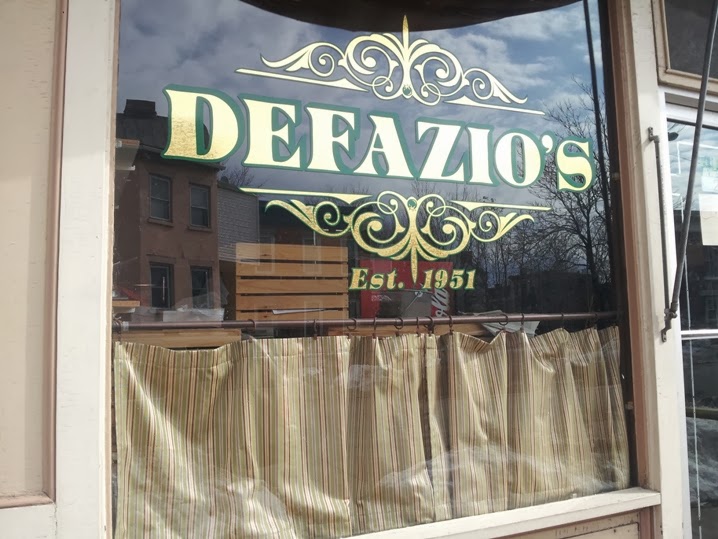 This Sunday, I got to take a peek behind the scenes at DeFazio's in Troy. Since the first pizza class was already full when I tried to register, I had over a month to look forward to this afternoon and I was really looking forward to it. Surprise, surprise...I was the first student to show up.

DeFazio's is normally closed on Sunday. Which makes sense because you can't run a pizza shop with 12 people wondering around the kitchen taking notes, sampling food, and snapping pictures. These classes (there is also a pasta class in addition to the pizza course) happen on their day off. And as a pizza nerd, I am extremely glad Rocco and Elizabeth DeFazio are willing to do this in their spare time. Besides being extremely welcoming and gracious hosts, Rocco and Elizabeth were very open about sharing recipes and techniques. So I wrote down as much as I could and then spent a good hour transcribing my notes into a yellow notebook I have. Apparently, I am evolving from pizza nerd to pizza obsessive. Look, there's a bald guy up front doing his impression of a court stenographer while dough gets made in a massive Hobart mixer that would look great in my basement: 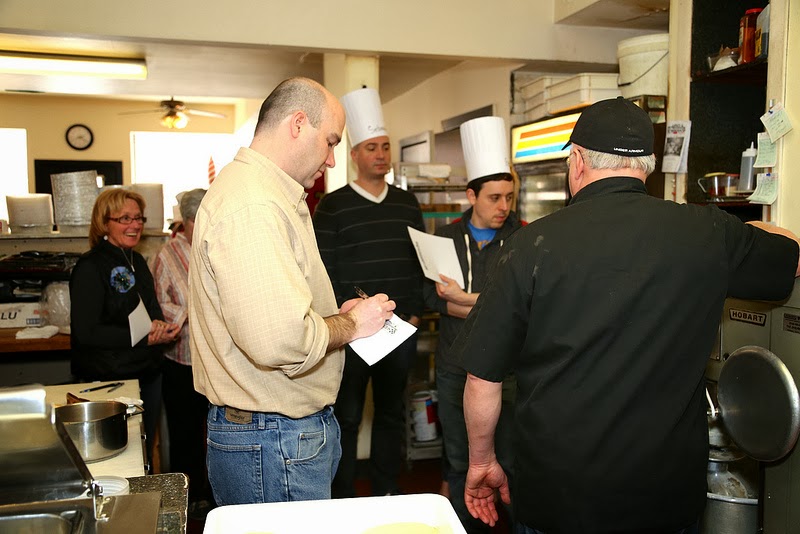 The class starts off with dough. All the ingredients go in the big Hobart mixer and they go for a whirl. Check out the hanger that keep the gear that lowers the mixing bowl in place. Such a simple, elegant solution. 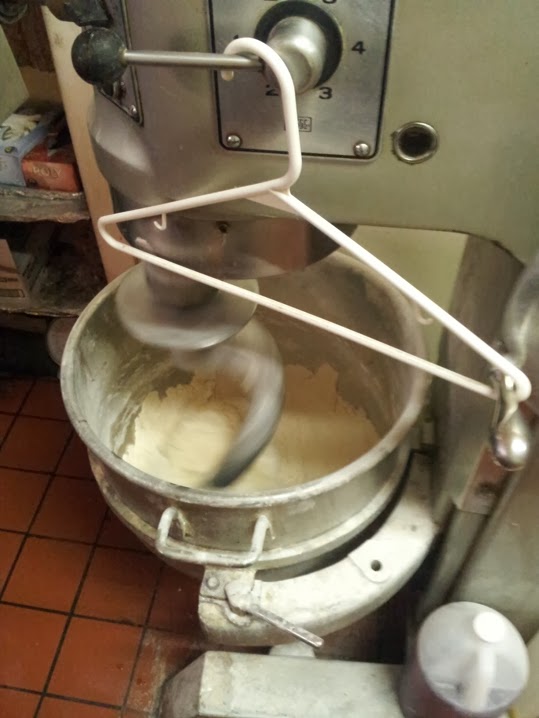 While the dough rests, Rocco mixes up a very large bowl of no-cook pizza sauce. 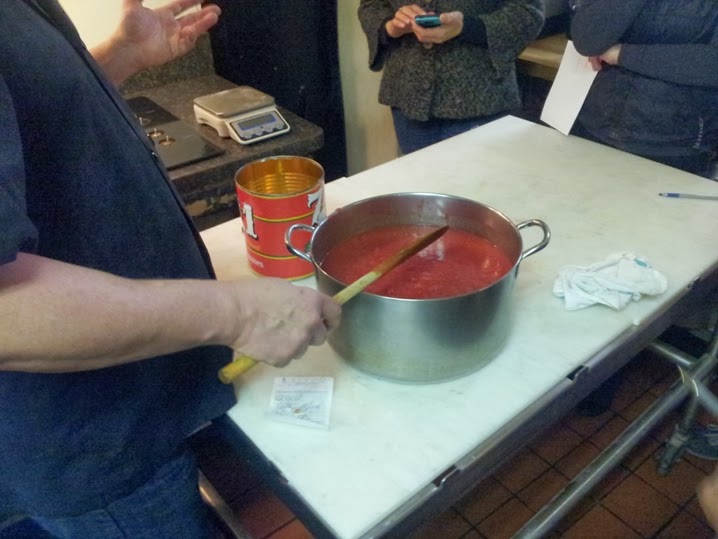 Once the sauce is made, Rocco prepares a focaccia followed by two deep dish pizzas. 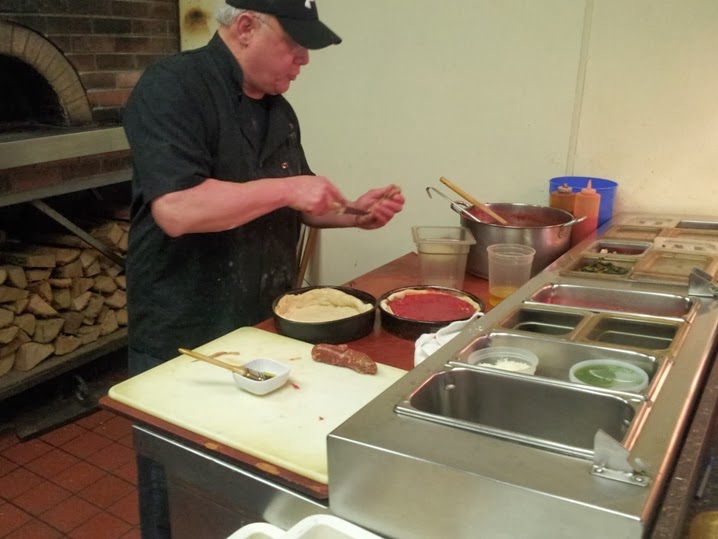 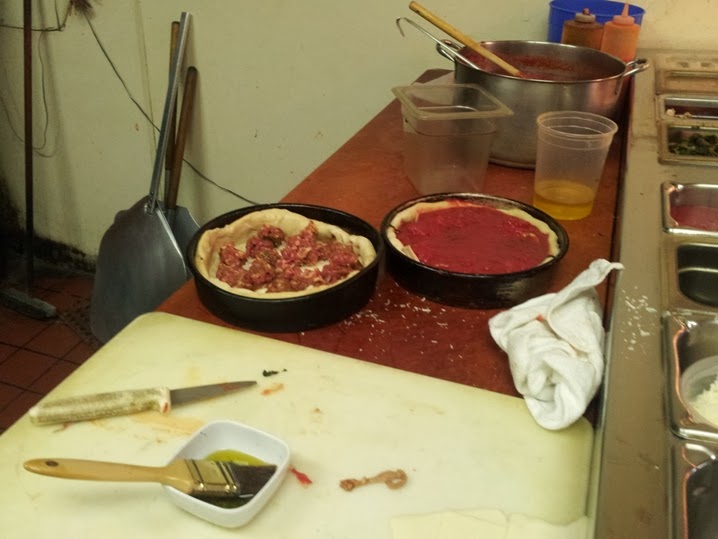 And when the deep dish pies, one sausage and one mushroom/spinach, come out of the the oven (not the wood fired oven) a little while later, they look like this: 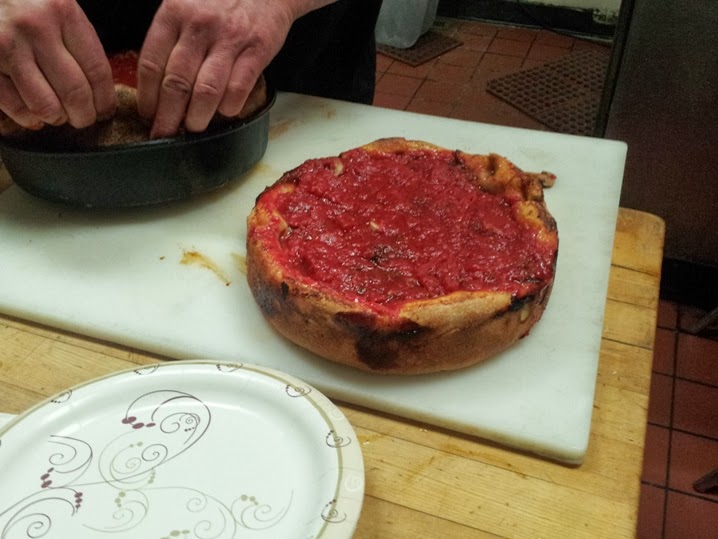 Before today, my only deep dish pizza experiences were at Uno's...and I didn't like deep dish [side note: everything at Uno's sucks]. I totally agreed with the recent Jon Stewart pizza rant when he said "Deep Dish Pizza is not only not better than New York pizza, it’s not pizza. It’s a fucking casserole," among several other less than flattering things about deep dish. It's not on the menu, but if Rocco offers you some deep dish pizza, eat it. His version is delicious.

While the deep dish pizzas were off cooking, everyone gets to make two balls of dough. This was perfect for me because I had no idea if I was balling dough correctly at home. I was pretty close, but I'll be better next time. The dough balls get a quick brushing of oil before getting wrapped in plastic wrap and put in everyone's take home pizza box (besides the two dough balls, everyone takes home some sauce, Pecorino Romano and a pizza cutter that says "make pizza not war"). After the dough was wrapped up to go, Rocco prepped some Stromboli while explaining the proper amount of fillings and his Stromboli folding technique. He made two Stromboli, one with cheese/broccoli/spinach/artichoke and an Italian mix. 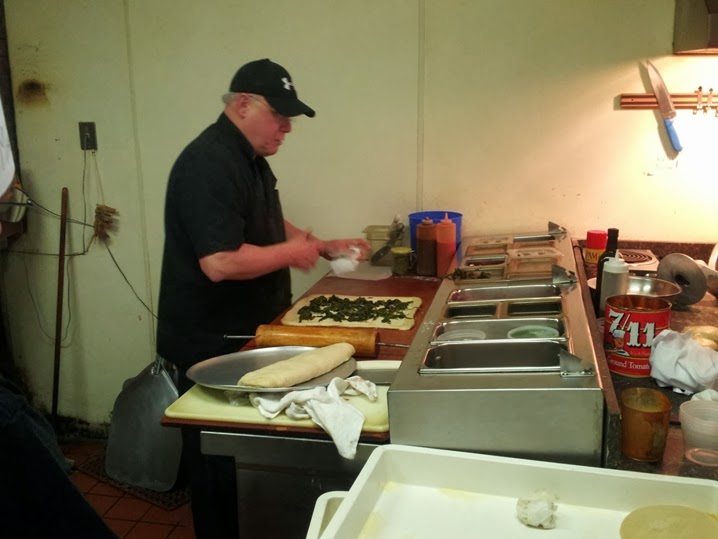 And then as if on a cooking show, two already cooked Stromboli are pulled out and sliced up. I took a little bit of the leftovers home and my kids loved it. 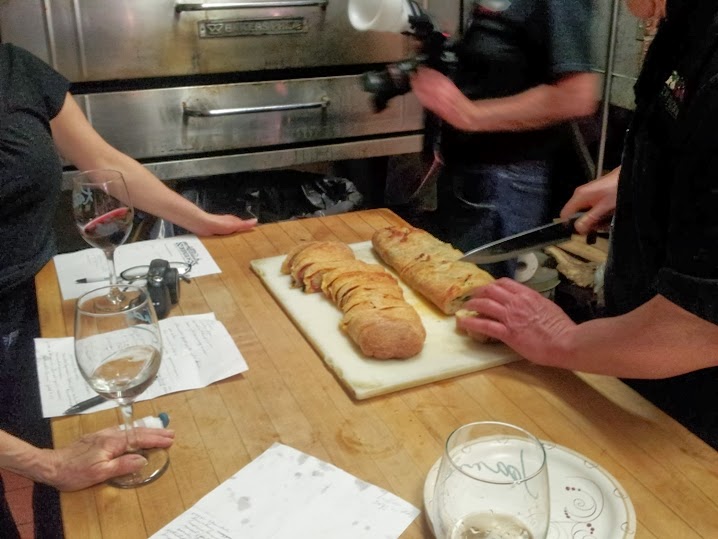 Then the class went onto pizza. When you walk in, the All Over Albany Tournament of Pizza trophy is on display. 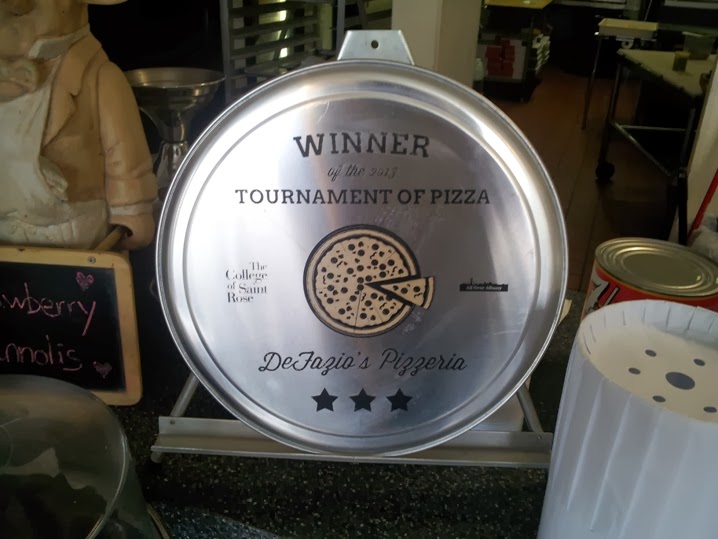 As a follower of the Tournament (I set the over/under and the spread for this year's finals), I was very interested to hear Rocco's take on the Tournament. He said the probably always came in the last round when they say, "You should make whatever you like. The judges don't like what I like." So this year, he submitted a pizza that he knew the judges already liked. And I've got to believe they will be hard to dethrone if they just keep pleasing the judges. The first pizza up, was this year's Tournament winning Buffalo chicken pizza. I had never had it before. Holy shit, it is good. 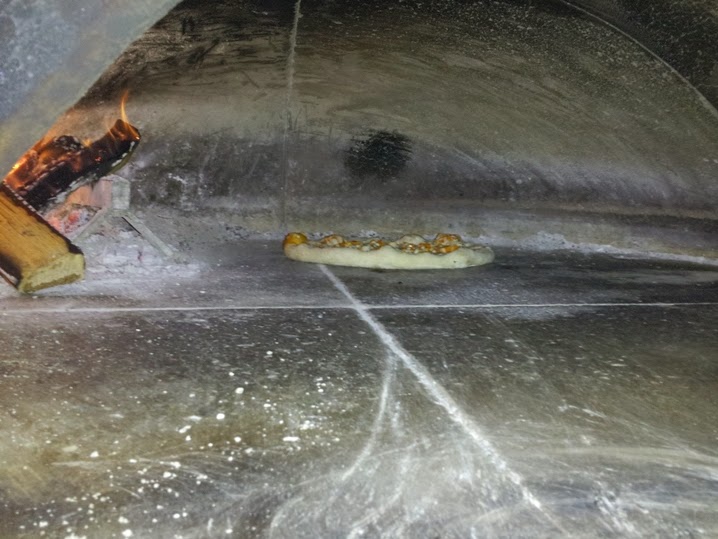 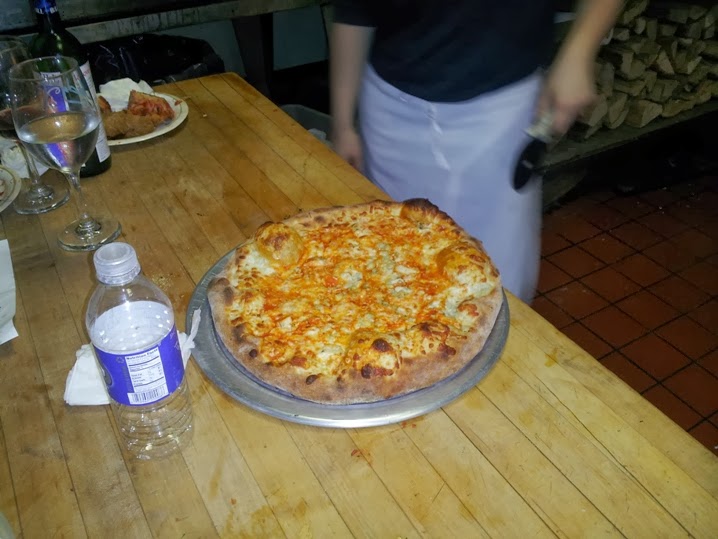 The wood fired oven is beautiful. That bad boy is a Mam from Modena, Italy and it eats about a cord of wood a month. Plus it has a great story. On the day it was being driven from Boston back to Troy, there was a Nor'easter and the weight of the oven and pasta machine helped the UHaul make it home through the Berkshires on the Pike. Next up was a white clam and bacon pie. Also delicious. 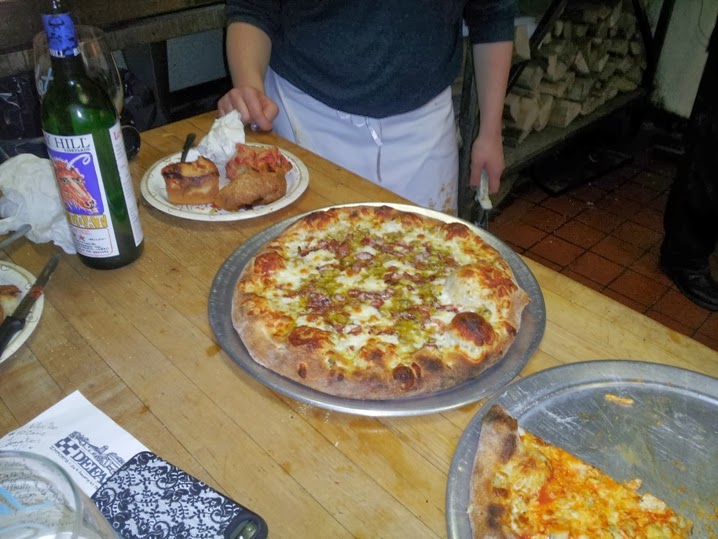 A classic margarita. Also delicious. Not sure if you are noticing a trend here. 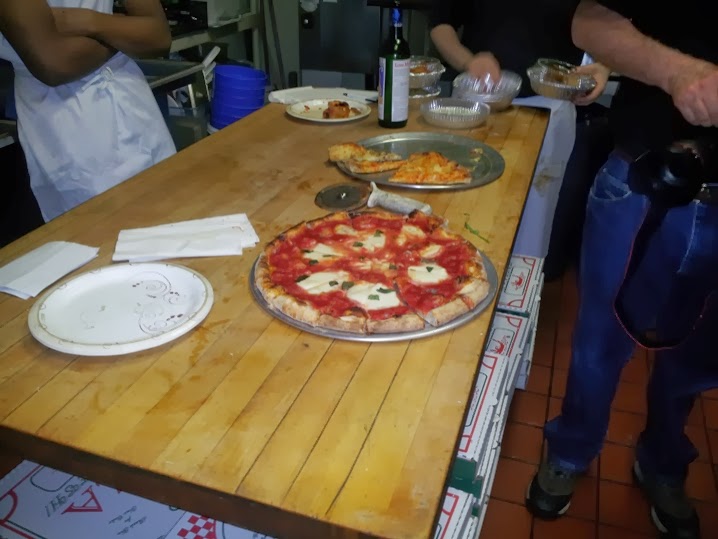 Then there was also a spicy red pepper pesto on a Brown's Brewing beer crust where all of the water in the dough was replaced with local beer. It was really good too. On the way out, we posed for a group picture. 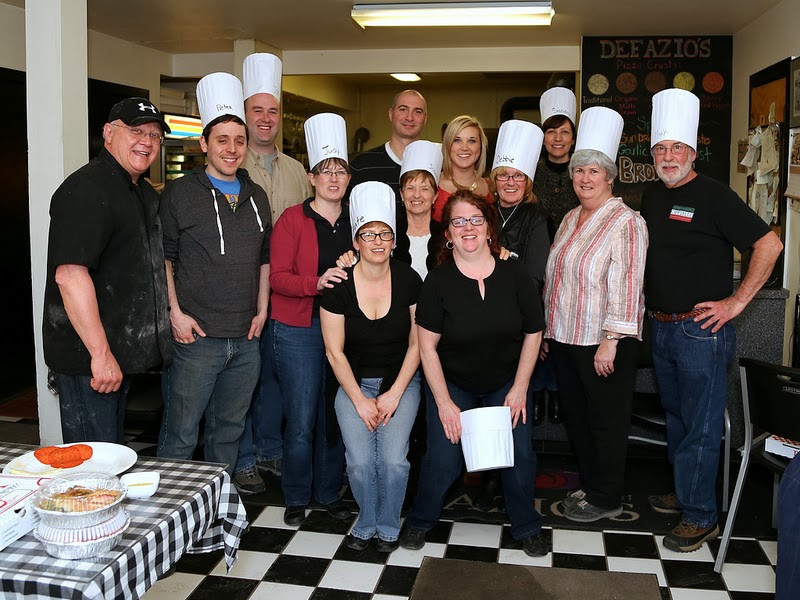 Many thanks to Elizabeth and Rocco for making this class available. If I can swing it, I would love to do some graduate studies in their pasta class. 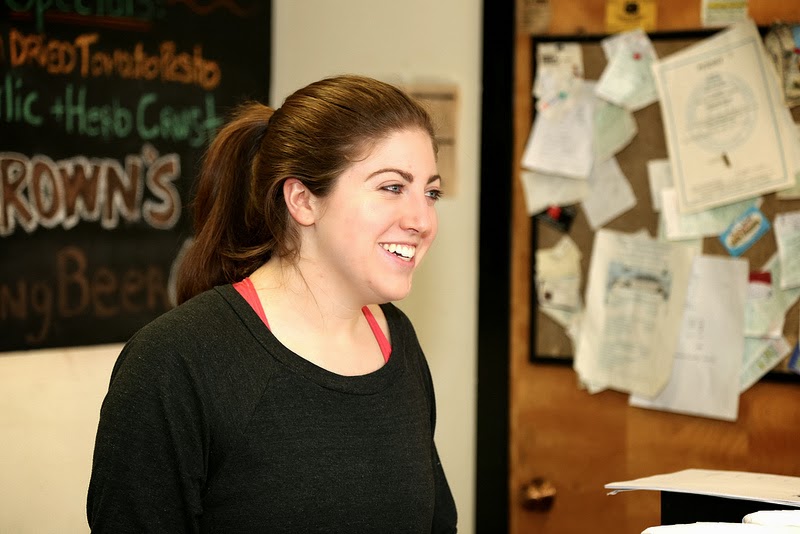 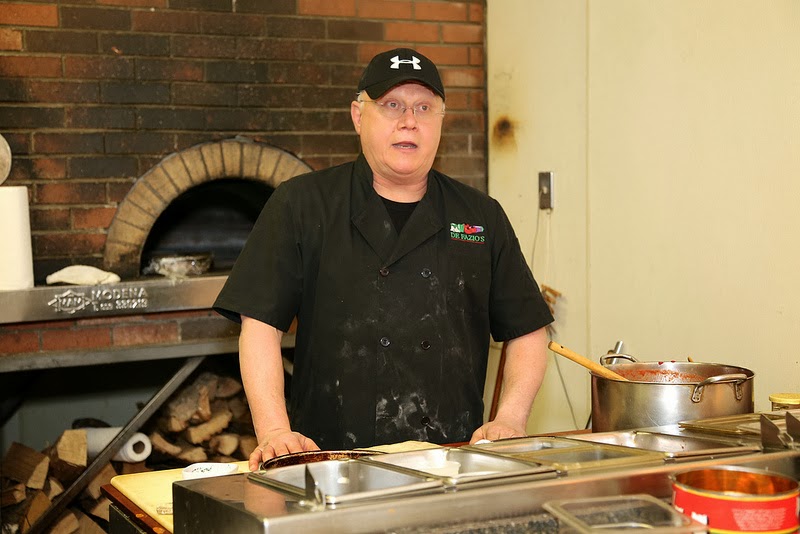 Since I have too much pizza on my brain (no clinical diagnosis yet) and Rocco was so forward with information, I think I might be able to clone a DeFazio's pizza. My proportions might be off a bit, but I'm pretty sure I'm in the right neighborhood. But I'm not telling, you'll have to take the class and come up with your own baker's percentages. I'd never do that to my future employer.


I daydream about standing next to an oven like that. If I can't get this backyard oven built this year, I might be bothering Rocco looking for a job.

And thanks to Mark Bauman for sharing his photos with the class.
Posted by Jon in Albany at 5:10 PM