Halloween is one of my favorite holidays. Other than the 4th of July, it is the only non-secular holiday that is REALLY celebrated in this country. Yes, I know there are other holidays that fit the non-secular bill, but are they really celebrated? Have you ever seen a kid excited for a month, bursting with anticipation and counting the days until Washington's Birthday? The sales are good, but c'mon.

My love of Halloween must have had something to do with growing up in the same house as "The Snickers Lady." That is what my mother became known as. In a pre-warehouse club era, my father had a client that owned a news stand. Every October, the order would go in and we would get boxes of full sized Snickers bars. A box of 36 candy bars at a reasonable price is much easier to get now. Costco, BJ's or Sam's will have them. My parents house in on a corner. If you come up the driveway, you go to what our family calls "the back door." If you walk up the path from the other street, you are at, you guessed it, "the front door." Pretty creative, eh? It is not uncommon for both doorbells to be ringing at the same time on Halloween. As a kid at the awkward "I shouldn't be wearing a costume" age, I can remember answering the door my mother wasn't at and handing out these full sized candy bars to kids. When you hand a kid a old enough to know the difference between fun-size and full-sized candy bars, the expression of sheer glee on their face is really fun to see. Perhaps I over analyzing or projecting, but for that specific moment in time all is good in that kid's corner of the universe.

That excitement stuck with me. The street I live one doesn't get much trick or treat traffic. I always overbuy candy with dumb optimism. This year I bought a box Nestle Crunch bars and another box of Kit Kats (I wanted Twix but BJ's only sells them in a combo pack now).  Of the 20 or so we handed out to trick-or-treaters, I'd guess 8 of them had OMFG expressions on their faces when they saw their choices. Two of the 8 were even kind of bouncing. The extra candy goes to the mailman, the kid's teacher's, people at work, and a collection for soldiers. I guess some of The Snickers Lady rubbed off on me.

The big change in our 2010 Halloween was the pumpkin carving. For at least 15 years, I have annually carved the same face into a pumpkin. Here's my buddy Boofus: 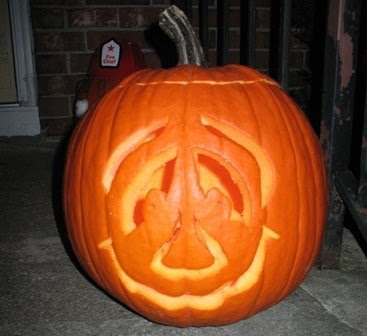 This year, I had two pumpkins and two aspiring jack-o-lantern designers. I still did the carving working off of drawings the girls made. I came pretty close. They were happy with the finished product. Maybe next year, Boofus. 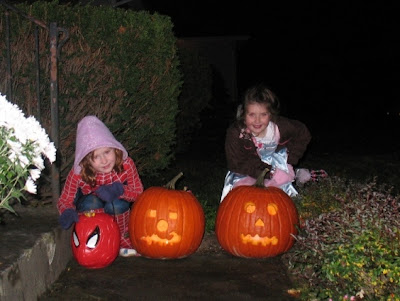